Ivy League Records is extremely proud to announce that Arrows, the debut EP from one of the country’s most exciting new songwriters, Shannen James, will be released on Friday 25 September! The 6-track collection includes Shannen’s first two singles ‘Collide’, her 2019 debut, ‘Something In The Water’, and the bright title track and new single, out everywhere today. ‘Arrows’ (single) received its world premiere on Sunday night by Richard Kingsmill on triple j’s 2020.

Dancing between vulnerable verses and a big singalong chorus, ‘Arrows’ is a striking guitar-pop moment. Both sun-drenched and melancholic, ‘Arrows’ threads memories of introspection together into a road-trip ready, empowering anthem, showcasing Shannen as an extremely powerful song-writing force.

Of the track, Shannen says,
“Arrows is an introspective song reflecting on my own dreams and ambitions and how uncertain it can be navigating through life to achieve them. I wrote this at a time where some of my friendships were falling away, as well as being really unsure in myself and what lies ahead, but at the same time knowing I was heading in the right direction. The idea of using arrows as a metaphor ended up being the core of the song; it’s about persisting with what it is you want regardless and knowing that you get more than one shot, it might just take a few goes before something sticks.”

Listen To ‘Arrows’ below

Recorded with up-and-coming producer and good friend Dylan Nash (Dean Lewis, Angus and Julia Stone) in a home studio on the outskirts of Melbourne, Arrows EP is a quietly confident collection of songs, written by Shannen over the course of a few months. The EP is a fantastic introduction into Shannen’s sparkling world, where pop is reimagined into something brimming with substance, warmth and of course, catharsis.

Of the EP, Shannen says:
“I think there’s an eclectic quality to these songs that allow my different influences to push through at certain times. It captures a sense of nostalgia for me that shares little snapshots of moments in time. Arrows was recorded in a tiny little home studio that was surrounded by big native trees and lots of bird noises and not a whole lot else. The studio itself was pretty tiny and that made me feel really connected to what I was making.”
‘Arrows’ follows Shannen’s recent single ‘Collide’ and her debut ‘Something in the Water’, both of which were embraced by both new fans and radio & streaming platforms – with adds across triple j, triple j unearthed and to-date, over 800,000 Spotify streams. Shannen has supported artists such as G Flip, Men I Trust & CLEWS. 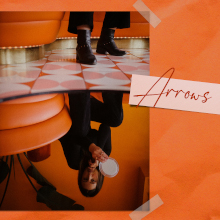