Following an extended hiatus in the recording sphere, Byron Bay’s deathly brutal hardcore outfit SHACKLES return to set a crushing new precedent with their latest LP, ‘Hatreds Reservoir’. The album will be released on Friday November 6th, through iconic label Resist Records (Parkway Drive, Polaris) and is available to pre-order now at https://orcd.co/hatredsreservoir.

To herald the new album, the band have released the first track and video from the record, the title track, ‘Hatred’s Reservoir’! CVLT NATION wrote about the song last night, saying that SHACKLES have “… created a wrecking machine, a wall of metal and violence that pulverizes everything before it and leaves only splinters in its wake.”

The band have laid down thirteen tracks of pure distilled grinding barbarity that takes immediate cues from Death Metal, Grindcore, Hardcore and Power Violence, while producing a mutant synthesis of them all.

Captured by Liam Kriz and mixed by Andy Nelson at Bricktop Recording (Harms Way, Dead in the Dirt, Weekend Nachos), the band burrow further into their collective stockpile of animosity and conniption to produce what could arguably be considered the strongest of their recorded output so far.

Saturated in abhorrence and hostility, this new record from SHACKLES bestows an absolute affirmation to the band’s claim as total purveyors of all things drear and desolate in the dead zone they occupy – between the realms of brutal hardcore and extreme metal.

SHACKLES’ new album ‘Hatred’s Reservoir’ will be released on Friday November 6th through Resist Records and can be pre-ordered now at https://orcd.co/hatredsreservoir. The first single/title track from the record is available now to purchase and stream on all digital stores and streaming platforms. 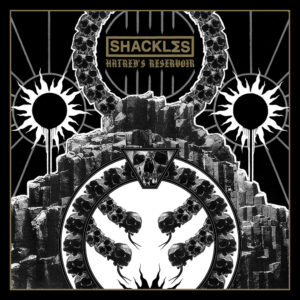