Perth heavy act Saviour are back! Bolder than ever, they are today dropping their new single ‘Violet’ ahead of the impending release of their fourth studio album ‘A Lunar Rose’. ‘A Lunar Rose’ is out this Friday February 28th and is available for pre-order at https://ffm.to/saviour_alunarrose and physical products at http://artistfirst.com.au/collections/saviour. Tickets are also now on sale for their ‘A Lunar Rose’ Australian tour at https://destroyalllines.lnk.to/saviour.

A Lunar Rose is a fitting follow up to previous releases ‘Once We Were Lions’ (2011), ‘First Light To My Deathbed’ (2013) and ‘Let Me Leave’ (2017) and further demonstrates the groups’ ability to create soundscapes that mirror the world around them. New single Violet is a heavy cut from the record – a record that is filled to the brim with light and shade, fragility and aggression and nuance.

The band have also re-launched their official website as a hub for all things Saviour – new music, tour dates and tickets, merch and more at https://www.saviouraustralia.com.

Today, they are also announcing that they will be hitting the road for a national headline tour with support from their mates in Diamond Construct, Blklst & Bloom for a stacked line up from start to finish. The tour starts June 5th in Bunbury then hits Perth for a hometown show on June 6th for weekend #1. Then it heads over to the east coast for the final leg of Adelaide on June 12th, Melbourne on June 13th, Newcastle on June 18th, Brisbane on June 19th, Sydney on June 20th then finishes in the ACT. Tickets are on-sale now through Destroy All Lines!

Vocalist and Songwriter Bryant Best, said that “A Lunar Rose for me is a bleak journey from where the brighter side of life meets the aftermath. I think it captures that reminiscent voice that most people have inside them and gives it real life audio. Listening back to the record, it’s still kind of hard to listen to without feeling a bit torn by the end. It’s an emotional journey where the dark out shadows the light. This album might just be the heaviest Saviour album to date. If it’s not the heaviest, it’s certainly the most aggressive. A Lunar Rose holds real meaning to all of us and it’s one that we are going to be proud of no matter what happens moving forward.”

This work is the first major release from the current lineup Bryant Best (vocals), Shontay Snow (keyboard/vocals), Daniel Rees (guitar), Michael Matta (drums) and Chris Pearce (bass). The band have maintained their haunting melodic qualities whilst returning to an emotionally powerful heavy edge, a balance that was vitally important in telling the stories of A Lunar Rose.

Best continued about the record – “Finding the sound direction of A Lunar Rose was something that came easy for us. The elements we all wanted from this record was to keep it heavy, keep it melodic, and keep it heartfelt. At its core, I think A Lunar Rose is a byproduct of that. For us, it feels natural and nothing about it feels forced.”

Saviour’s new single ‘Violet’ will be released along with the album ‘A Lunar Rose’ this Friday February 28th 2020, with pre-orders at https://ffm.to/saviour_alunarrose and physical products at http://artistfirst.com.au/collections/saviour. Tickets for the ‘A Lunar Rose’ Australian tour are on sale now at https://destroyalllines.lnk.to/saviour. 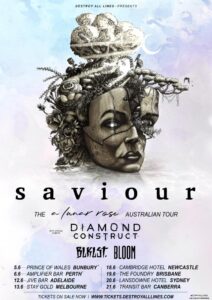