In an Australian exclusive, Bloodlines is excited to announce a new reissue of Rowland S. Howard’s legendary debut album Teenage Snuff Film, to be made available on aqua and black dust vinyl. Pressed on 160g vinyl, it is a 3-sided double album, with a Rowland S. Howard illustration on Side D.

In February, Bloodlines reissued Teenage Snuff Film on black vinyl, the first time it had been available in many years. With the black vinyl selling out instantly, this reissue is bound to be highly sought after by collectors.

A vital presence in Australia’s post-punk scene, Rowland S. Howard created his own emotionally intense sonic language, first with Young Charlatans, then alongside Nick Cave and Mick Harvey in The Boys Next Door and The Birthday Party, followed by These Immortal Souls and Crime & The City Solution. Tragically, Rowland S. Howard passed away on December 30 2009 from liver cancer.

“Rowland S. Howard conjured these dark musical worlds that weren’t always easy to live in, but every word and note of them rang true—and they always made you feel something. Teenage Snuff Film is full of tension and despair and strange, haunting guitar. It’s a classic, like nothing else.” – Britt Daniel (Spoon)

“Forget the Prince of Darkness, Rowland S. Howard is the true sultan of heartbreak, loss and regret.” – Laura Jane Grace (Against Me!) 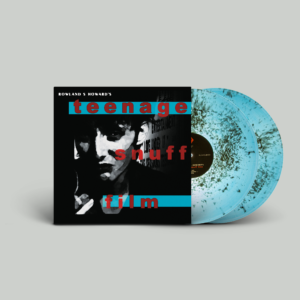