Newcastle’s alternative emo outfit PSTCRDS are back with their very own brand of soaring pop punk with new single “Don’t Fake It“. The new single comes as the first to be released off of upcoming EP ‘This Place Or Our Pace‘ and to celebrate the release, PSTCRDS will play a couple of launch shows in both Sydney and Newcastle in May!

PSTCRDS teamed up with music lord Chris Lalic (Windwaker, Rumours, The Last Martyr) on “Don’t Fake It” which features catchy hooks and a soaring chorus. The single is about trying to find the balance between following your own dreams and passions while also honouring commitments and relationships with the important people in your life.

Vocalist Steven Reid explains the motivation behind the single by outlining the struggles that creep up in the process “Don’t Fake It is about feeling trapped, stressed and as if you’re caught in a big hole or mess that you can’t ﬁx. Even though you’re trying your best to make everything work, it just never seems to come together and never seems to come across how you intend to the people you care about.”

“Don’t Fake It” is the first release off of forthcoming four-track ‘This Place or Our Pace’ due out May 1. ‘This Place or Our Pace’ loosely follows a ‘coming of age’ commentary but takes a more reflective approach. “As adults we tend to glorify growing up and look back as if they were the best years of our lives and that those experiences will stay with us for a lifetime – even though most people actually look back on adolescence and growing up as the messy, uncomfortable, maze of confusion and anxiety that it is” explains Reid.

To celebrate the release of the EP, PSTCRDS will play launch shows at Newcastles Hamilton Station Hotel and Sydney’s Oxford Art Factory. Newcastle’s launch will take place on Thursday 7th May supported by friends in Everleigh, Good Thanks and Isaac’s Myth and Sydney’s show will follow the night after on Friday May 8 with support from Everleigh and A Swift Farewell. Tickets available at Moshtix.

Formed in early 2019, PSTCRDS is Steven Reid (vocals), Henry Holzberger (guitar), Tom Pockett(guitar/vocals), Brad Reid (bass/vocals) and Jack Stewart (drums). The band hit the ground running last year with their unique blend of emo and pop punk, playing to a full capacity crowd at The Cambridge Hotel in Newcastle off the back of their debut single “Someone You Can Be Proud Of“. Taking support slots for bands such as Windwaker, Rumours and Traces, the band quickly followed up with their second single ‘Stories’, which saw rotation on The Faction and plays Triple J’s Short.Fast.Loud.

The next installment is here – “Don’t Fake It” is available now to stream and purchase at all good online outlets and streaming platforms!

Watch ‘Don’t Fake It’ Below: 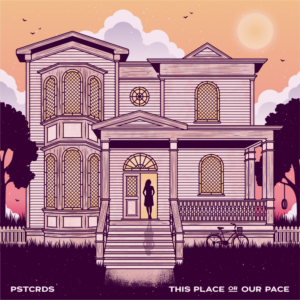