Critically acclaimed Brooklyn duo Overcoats announce the March 6 release of their upcoming album The Fight via Loma Vista Recordings. Tempering punk energy with vulnerable vitality and irresistible catchiness, The Fight is a ten-song battle-cry. It’s the kind of record that might inspire you to quit your job, run a marathon, divorce your husband, change your life in the way you always wanted to, but needed an extra push for. The Fight is the push.

“The idea you have to fight for who you are, what you want, and what you hope to see in the world became poignant for us,” says Overcoats. “We realized the thing to do is not to wait for life to get easier, but to start fighting harder.”

The Fight is available to pre-order now on deluxe vinyl with 10-card custom tarot deck, CD, and digital HERE!

The track is equal parts dark and brooding as well as hopeful and anthemic – a dichotomy which is mirrored in the its soaring chorus “there’s a fire, there’s a fury, the sky is falling, but we’ll get through it.”

The video was shot in Wrightwood, CA and was directed by her Productions, who said this of working with the band:

“When producing and directing for Overcoats, our goal for the video was to provide a visual representation of their musical growth. Overcoats’ artistic dedication to the creative process supported the creation of a truly authentic video.”

Overcoats first launched this fresh and fiery new chapter with a salty single entitled “The Fool,” which NPR named one of its “Top 20 Songs of September.” The video saw the duo making a statement by shaving their heads on-camera and igniting the next phase of their career with fearless honesty. They followed the release of “The Fool” with two additional new tracks, “Leave If You Wanna” and “Keep The Faith.” The three anthems signify what’s to come on the new Overcoats album and feeds an urgent theme of fighting for self, spirit and soul at all costs, whether it be in a relationship, in world or in life.

About Overcoats
Shaving their heads, grabbing guitars, and pulling no punches, Overcoats, made up of New York-nativesHana Elion and JJ Mitchell, etched a ten-song battle-cry on their second full-length album, The Fight [Loma Vista Recordings]. Their vision is not about picking up arms, but rather about picking oneself up. It’s the kind of record that might inspire you to quit your job, run a marathon, divorce your husband, change your life in the way you always wanted to, but needed an extra push for. This is the push.

As Overcoats wrapped up touring behind their critically acclaimed 2017 debut Young, it seemed as though the world was collapsing around them. There was no choice but to fight. So, they donned guitars in a shared New York city apartment and wrote the soundtrack to their fight. Hana and JJ personally assembled a team around themselves to help support their vision. Within a self-contained environment and under the watch of one London-based creative director, two LA-based producers, and, of course the two creators, the album came to life.

Inspired by everything from Young Marble Giants to The Violent Femmes to Iggy Pop, Overcoats rooted this next chapter in electric guitar and punk energy culled from nearly two years on the road. At the same time, they tempered the energy with a vulnerable vitality and irresistible catchiness.  JJ explains, “The new music is a bit grittier and more rock-leaning, but there has always been and will always be a through-line of our voices singing in harmony.” “This album is going to break your heart, but also try to put it back together,” states Hana. “Allowing the guitar to dictate the sound, we tried to represent all of the stages of what this realization was. It’s not just depression, anger, and sadness; it’s the motivational stage too. It’s the pop song that helps to distract you from your sadness. It’s a call-to-arms to pull yourself up by your bootstraps and fight to stay alive.”

The Fight follows Overcoats’ debut full-length Young, which stood out as “one of the Top 5 bestselling albums from a debut artist on an independent label in 2017,” bowed at No. 4 on the Alternative New Albums Chart and landed at No. 12 on the Heatseekers Chart. Overcoats generated 50 million-plus streams, sold 30K albums, and regularly averaged 1 million-plus listeners on Spotify. Billboard touted Young among “The Best Albums of 2017 – Critics Pick,” and NPR Music named it the “#4 Album of 2017.” The album also received praise from the New York Times, NPR, Entertainment Weekly and more. 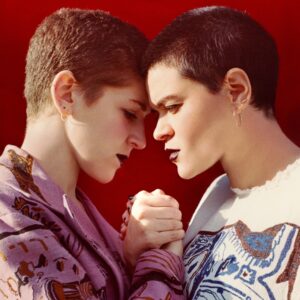