Australia’s elite metallers Northlane have released the video for latest single, 4D, taken from their critically acclaimed album, Alien. The video celebrates the energy of the song and was filmed during the band’s Australian national sold out tour in October. The band recently performed a stunning version of the song for triple j’s Like A Version.

Watch the video for 4D here:

Off the back their huge sold-out national headline tour, Northlane will be on the road again in January 2020 for the 4D regional tour. The tour sees the band hitting up the east coast of regional Australia with special guests Gravemind and local triple j unearthed winners.

2019 has been a huge year for Northlane with the release of their bold and most personal 5th album. Alien which had fans and critics raving, racking up over 25m streams and leading to sold-out shows worldwide. With perfect scores and being hailed as a contender for album of the year, Alien debut at #3 on the ARIA album chart. Alien has been nominated for ARIA’s Best Hard Rock or Heavy Metal Album and triple j Australian Album Of The Year alongside the likes of G Flip, Hilltop Hoods and Matt Corby to name a few. “Not a moment is wasted on Alien and the band have again proved why they’re gamechangers in Australia’s heavy scene.” – triple j

Their previous three albums have debuted in the Top 5 in Australia – with Node landing at Number One before going on to win an ARIA Award for Best Hard Rock or Heavy Metal Album, an accolade also awarded to Mesmer.

In conjunction with triple j unearthed, Northlane are running a competition for grassroots level local bands in each area of the tour to win a paid opening slot on the 4D Regional tour in January 2020. Acts are to have their tracks uploaded to triple j unearthed to be in the running.

2019 marks the 10-year anniversary for Northlane and the band are in no mood to play it safe. Kicking off the tour with a performance at UNIFY Gathering, make sure you hit up one of the shows and witness one of Australia’s best live heavy acts.

All tickets are available now at northlaneband.com 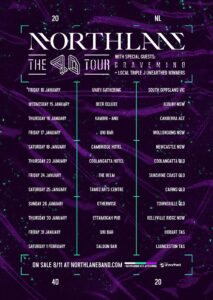