(MONDO ROCK LIVE AT THE PIER)

Bloodlines is proud to announce a very special release: Summer Of ’81 – Mondo Rock Live At The Pier, to be released on 28 August on double vinyl and CD. The double vinyl will be pressed on coloured vinyl, with one translucent red disc, and one translucent purple disc. The album was released digitally in May.

Summer Of ’81 was recorded at Frankston’s Pier Hotel in 1981. The show was originally broadcast live by the then new EON FM, which was Australia’s first commercial FM station. Summer Of ’81 features all the hits from Mondo Rock’s highest-selling album Chemistry, which was released later that year, including ‘State Of The Heart’, ‘Cool World’, ‘Chemistry’ and ‘Summer of ’81’, as well as the band’s debut single, ‘The Fugitive Kind’, and ‘We’re No Angels’. The album also includes a Mondo Rock rarity that never appeared on a studio album – ‘Slice of Life’.

Manufactured in Australia, the vinyl was mastered by Martin Pullan and overseen by Mondo Rock’s Ross Wilson.

“It’s only taken us 39 years to release this album but we’re very proud of it,” Ross Wilson says. “This was an incredibly exciting period for Mondo Rock. We were hot and hungry, and you can hear it on this album. We haven’t had one of our new releases released on vinyl for 30 years,” Ross adds, “so we’re all super excited.”

“In my youth, I became a dedicated vinyl hound,” Ross Wilson smiles. “Once you start, it’s hard to give it up. To wonder at the awesomeness of a needle in a microgroove that somehow becomes full spectrum sound – it is magic.” 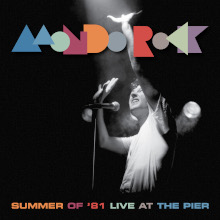