Mental Cavity, Canberra’s heaviest exports, are today releasing the second brutal single from their brand new album ‘Neuro Siege’. It’s called Artificial Integration, it will be released this Friday November 22 on all online stores and streaming platforms – and it features Taylor Young from epic US death metal outfits NAILS and Twitching Tongues! The track is a short sharp blast of riffs, pinch harmonics and disgust at the human beings treatment of the earth!

New album ‘Neuro Siege’ will arrive on Friday December 6th, to be released through Brilliant Emperor records. The record can be pre-ordered right now digtally at https://ffm.to/mentalcavity_neurosiege, and for physical pre-orders, hit up the Brilliant Emperor store at brilliantemperor.bigcartel.com/products. 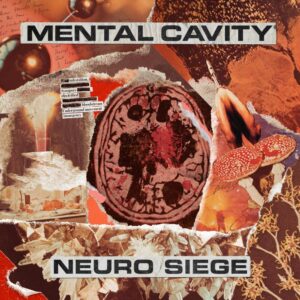 According to Aaron Osborne of Mental Cavity, the new track is “…about people’s dependence on technology and this taking over more and more of their lives. Technology then over time becomes self-aware and is disgusted at humans for being wasteful and weak.” The single premiered on triple j’s The Racket with Mitch Alexander earlier this week.

Neuro Siege is Mental Cavity’s second full length album and was produced by Mike Deslandes (YLVA, Pagan, Tropical Fuck Storm). After the release of 2017’s Aneurysm, Mental Cavity have continued to grow and push further out of the shadow of their slumbering musical-brethren I Exist.Mental Cavity is Aaron Osborne on vocals and guitar (also host of the Oblivious Maximus podcast),Alex Young on vocals and bass, Rohan Todd on guitar, and Simon Murphy on drums.

New single ‘Artificial Integration’ featuring Taylor Young from NAILS and Twitching Tongues will be released on all digital stores and streaming platforms this Friday November 22.