Melbourne based alt-R&B artist CEEKO returns with a spellbinding new single called ‘Open’, offering listeners the first taste of his upcoming soul-stirring EP ‘Where Do We Begin’

Inspired by those hard done by love, ‘Open’ is a poetically candid account of the challenges in being scarred by previous relationships. It’s about the unwillingness to let anyone else inside your heart, until you meet another person who feels the same pain.

On the track CEEKO says, “I hope this can awaken a sense of self awareness. I hope it heals and inspires everyone to believe in love again if they’ve been burnt by love before. It’s not always pretty, but it’s love.”

Created alongside producer HFNR, the chilling soundscapes feature CEEKO’s lush vocals that effortlessly wrap around warm guitar licks and elastic drums, bursting with emotion over a breathy tempo. The tantalising harmonies taunt between each pause to continuously build anticipation until it surrenders to a musical climax driven by CEEKO’s opulent falsetto.

“Within a few minutes we had the hook already complete. I remember ‘open the door’ was the first thing I sung before I wrote anything down.” 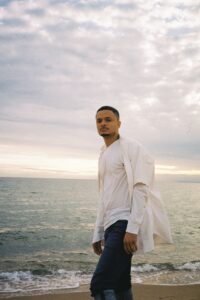 CEEKO is a Melbourne-based, South African-born artist who draws inspiration from his roots, combining afro-beat rhythms, melodies and spirit with a touch of R&B and Soul. His accolades include a feature on Illstrtd’s ‘Work Hard’, guest vocals on Spit Syndicate’s ‘Houdini’, and notable work with top grade artists including Remi, Billy Davis & The Good Lords, and Tentendo.

Scheduled to release later this year, CEEKO’s upcoming EP ‘Where Do We Begin’ dives deeper into the joys and pains of love, promising more romantic rhythms and soulful melodies.
Follow CEEKO