METHOD OF PLACES – OUT FRIDAY

VIDEO ‘GOOD SIDE’ OUT NOW

It is with great excitement that Ivy League Records announce the release of Lewis Coleman’s beguiling debut album Method of Places – out Friday 20 November. Alongside the album’s previously-released offerings ‘Going Your Way’ and ‘Animal’ also comes the brand-new single, ‘Good Side’. Premiered last night on Triple R’s Out on the Patio, ‘Good Side’ is a mesmeric four-and-a-half minutes that encapsulates the depth and artistry of the Melbourne musician.

Watch the video for ‘Good Side’

Lewis Coleman on ‘Good Side’:

“Good Side is an all-encompassing crush. The limbo period of excitement and possibility, in combination with the fear of edging too close and dissolving the delicate fantasy.”

The fruits of Lewis’s labour are on brilliant display on Method of Places. It’s an album which effortlessly straddles the worlds of indie rock, electronica, jazz and soul, bristling with big ideas and artfully arranged songs that are both abstract and melodic, shifting and morphing around you, pulsing with a hushed intensity, but always grounded by a rhythm section so spartanly groovy that your head can’t help but nod along in assent.

Written, played and self-produced across five years, in five bedrooms, the record has a big kind of history in it, both sonically and lyrically. Ask Coleman and he’ll unassumingly tell you that for him each song is a micro-world containing multiple moments in time, each one swimming with memories and pieces of himself that span the last half-decade.

In ‘Good Side’ he is a 15-year-old kid in Year 9, trying on corduroy pants at Savers (Melbourne’s much-loved Mecca for secondhand clothes), developing a personality, finding friends, having crushes. In ‘Going Your Way’ he’s six wines in, a piano stool creaking beneath him as he idly plays the keys. In ‘Is This Me Now’ he’s accidentally out of his mind on hallucinogens, as synths warp and crash around his distant voice, convinced he’s broken his brain forever.  When taken as a whole, Method of Places becomes a history of his young adulthood up till now. A Memory Palace, where all the songs are different rooms, co-existing under the album’s roof.

As well as being championed by the likes of FBI & triple j unearthed, Coleman’s previous single ‘Going Your Way’ was CLASH (UK) ‘Track of the Day’, with the publication describing the song as “heady, bewitching, and ultimately immersive” and labelling him as ‘definitely an artist to watch as 2020 develops’. 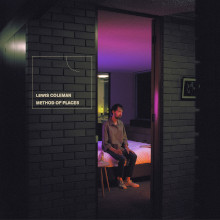