Since 2008, Kestrels has been the primary project of singer/guitarist Chad Peck, who spends his time offstage as a high school English teacher. For this album he is joined by livewire drummer Michael Catano, the driving force between Maritime math-rock bands North of America, The Plan, and The Holy Shroud, whose credits also include an early stint with Len. Peck’s lulling vocals flash back to influences from My Bloody Valentine, Swervedriver, or Built to Spill, while Norma MacDonald’s spectral harmonies conjure the sound of a Cocteau Twins/Beach Boys fantasy jam.

Peck began writing Dream or Don’t Dream while staying on the couch of his friend, Ash frontman Tim Wheeler. From here, the album’s instrumental scaffolding was laid down throughout a series of studio sessions at Steve Albini’s Electrical Audio in Chicago, Sonelab in Massachusetts, and Sonic Temple in Halifax. He connected with his guitar hero J Mascis after Kestrels played at a bike shop with Dinosaur Jr. The white-haired wizard of riffs recorded seven different takes for album standout “Grey and Blue”, leaving Peck in the surreal position of compiling a Mascis guitar solo. 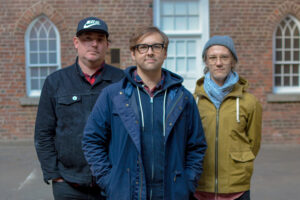 The guitarist’s bond with Agnello came even more naturally. These fellow gear heads ran wild, drenching Kestrels’ recordings in phasers, flangers, spring reverb, and the pitch-shifting sounds of a Rainbow Machine. “It’s A Secret” bounces between passages of yearning indie-rock and ambient drift, while “A Way Out” slips downstream from shoegaze into shredding Crazy Horse leads. “Everything Is New” tweaks an octave fuzz effect into disintegrating tones, before the afterburners are truly unleashed on the six-string pyrotechnics of “Feels Like The End.” While utilizing sonic experiments to push these songs into alien territory, one of Peck’s ultimate goals for the album was to keep it sounding “human”, “honest” or in Agnello’s words, “vibey.”

“I heard some of Kestrels’ influences early on, and they were bands that I really loved too,” says Agnello. “The obvious one was Dinosaur Jr, who I’ve been working with since 1993, so I tried to apply some of the mixing techniques I use on J’s guitar sound. I use a lot of analog pedals and tape delays on all the instruments to give them more warmth and depth than you get with some plug-ins. The idea was to have the guitars jumping out of the speakers without being harsh.”

Dream or Don’t Dream traces a transition in Peck’s life from a low period to one of excitement. Kestrels’ previous 2016 self-titled album was by all means a success, earning critical acclaim from The Fader, Noisey, and BrooklynVegan, charting airplay from CBC Radio 3, KEXP, and the BBC, plus nominations for the ECMA and Music Nova Scotia rock album of the year. However, behind the scenes, Peck’s longtime backing band dissolved, leading to a creative hiatus.

Focusing on the completion of his Masters degree while scoring podcasts inspired him to turn introspective. Returning to what he does best, Peck began writing lyrics about taking charge of his life, who he wants to be, and facing the reality of those choices and directions. For anyone paying close attention, he also slips in sly references to novelist David Markson, Virginia Woolf, and the time-traveling finale of Twin Peaks: The Return. Rendering this reflective song-suite with world-class collaborators, Kestrels have returned with a recharged conviction.

“Making records is a fundamental part of my life, so I knew I was going to keep going,” Peck concludes. “I’ve learned a lot about writing and recording so I was confident I could make something great. I sort of relished the challenge of being on my own in a lot of ways because I know how I want things to sound. It did make for some long nights in the studio, but felt like a good and important hurdle to cross. I’m ready for the next one.”

Dream or Don’t Dream will be released on July 10, 2020, via Darla Records. You can pre-order it here. 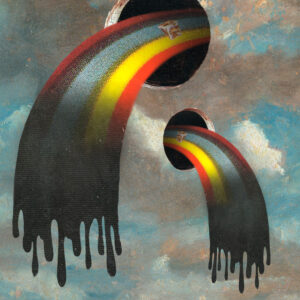