After ending 2019 on a high note winning the opening slot for Brisbane Good Things Festival early December, Joy In Motion are wasting no time with the release of their brand new pop rock anthem “Casual Enemy”. Not only this, but the four-piece will be joining Portugese Linkin Park tribute band Hybrid Theory on their Brisbane leg of their national tour next week!

Joy In Motion teamed up with ARIA nominated record producer Stuart Stuart (Analog Heart Records) to produce, mix and master “Casual Enemy”, which introduces a fresh new sound and experiments with a more polished and beat driven vibe. The band recruited music cinematographerAndrew Vaughan (Homefront, Griefcase, Days Like These) to direct and produce the music video, which narrates the uphill battle of chasing respect and fighting to be treated like a human being after being walked over, taken advantage of and treated like less than.

Vocalist Jake Solway explains that the song serves as an anthem for those that relate: “Casual Enemy was written in early 2018 after a fallout with somebody I considered a close friend. It was in the aftermath of a big fight and I’m not a confrontational sort of guy, so a lot of things I wanted to get out made their way into the song – which was cathartic.”

Forming in 2016, Joy in Motion in its current form is Jake Solway (vocals), Carly Sinn (drums), Joshua Wessling (bass) and Jesse Simo-swer (guitar). The bands debut EP, ‘Falling Out‘ dropped in 2017 and paved the way for an East Coast tour and support slots for the likes of Young Lions, Real Friends (US), Tonight Alive, Slaves (US), Never Shout Never (US), The Dangerous Summer (US) and The Red Jumpsuit Apparatus (US) to name a few.

Building on the hype ‘Falling Out’ earned them, the four-piece released their single “Off By Heart” which put a darker, heavier spin on pop rock and contrasted with the happier, more upbeat feel of the EP. Late last year Joy In Motion were put to the test in a fan voted battle of the bands competition that would secure the winners a spot on the Good Things Festival line up in their hometown. Playing up against a few of Brisbane’s most exciting emerging acts, Joy In Motion came in first place and celebrated their win atop the Good Things stage shortly after.

Off the back of their Good Things performance, the band are back with their new single “Casual Enemy”, available now to stream and purchase at all good online outlets and streaming platforms! 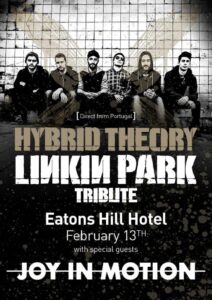