Today Australian raised, Canadian based producer Jay Cooper releases his debut EP INTERIM, a concept project about navigating the city as an artist, building and destroying to forge the new. Listen HERE.

Of the EP Cooper says “The concept of INTERIM is navigating a building, one that’s constantly shifting and changing as you move. It’s like urban life, trying to scale this structure and forge a path for yourself.  It’s up to you who you trust and how you move through the levels. It’s a recurring dream I have where I’m in some kind of living & breathing building that’s endless, and everybody I know is in there somewhere. These songs will have views into the basement, as it fills up with water, the elevators, the echoing stairs, the rooftop overlooking the garden maze, the ventilation system, a forgotten outpost, and wings of the building that you weren’t supposed to go to.”

INTERIM traverses further into the bleary-eyed RNB of previous singles ‘21 Personnel’, ‘nonethewiser’ and ‘Shallow Anthem‘, taking the time to formally introduce us to Cooper’s world. Inspired by moments of reprieve and reflection on relationships and his career trajectory, the sheer unpredictability of life dawned on Cooper. A lack of roots and being adaptable begs the question, does one rely on their instincts and emotions or stick to what they know? Over eight tracks the EP unpacks how an artist’s creative world is built and deconstructed, what values are compromised or upheld. Ultimately dependant on one’s ability to keep up. Catching himself moving through these motions, INTERIM illustrates the internal conflict of “wondering if you’re acting as a true reflection of yourself, or just another moving part within the building.”

Having gained early acclaim under the JaysWays moniker, Cooper’s previous releases have featured on playlists across Spotify, triple j Unearthed and FBi Radio, with support from Pilerats, Purple Sneakers, CLIPPED.TV and more. Since relocating to North America Cooper has worked in collaboration with artists such as Annahstasia, Selasie Wussah, Robert Glasper and Common plus more as a singer-songwriter and producer. His work with Annahstasia on the album Sacred Bull went on to see the artist tour alongside Lenny Kravitz on his Raise Vibration tour. Actively maintaining a steady creative flow, the release of INTERIM demonstrates Jay Cooper’s fierce creative direction and his multidisciplinary abilities continue to shine.

INTERIM by Jay Cooper is out now.
Buy/stream it on Spotify, Apple Music, Soundcloud, Bandcamp and more. 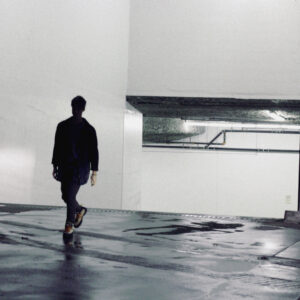