‘EVEN HEADBANGERS GET THE BLUES’

Introducing hearteyes, the latest project from Sydney producer and multi-hyphenate artist Maurice Santiago, who shares the second mixtape under this moniker, even headbangers get the blues. Listen HERE.

Already a prolific figure in the Sydney underground, Maurice Santiago channels his pop ambitions through hearteyes into his most personal project yet. Driven by the vivid creative direction of Kurt Johnson (Charli XCX, Cub Sport), packaging earnest, heart-rending honesty inside sleek, genreless tracks. From his work as a former member of post-punk outfit Death Bells to the euphoric 90s house of his George Michelle alias, to his reputation as a much-sought-after producer and songwriter, what threads together all of Santiago’s work is the strength of his artistic vision and community-minded, no rules ethos.

Of the project, Maurice shares: “Everyone has the face they show the world – and one they only show themselves. In an age where everything is dictated by image, artists compromising their integrity to synthesise a specific ‘brand’, it can feel at times we are offered a transacted product in lieu of a sincere connection in music. ‘even headbangers get the blues’ is my way of challenging the conventional approaches to music we have learnt in the past decade; genre is no longer a boundary but a malleable, cross-pollinating tool in helping to further articulate an artist’s story. I don’t want to be a genre-specific artist, I want to communicate how I feel and create a connection with people through using as many styles of music as possible. Every song is different, but in this story they read into a greater idea of the disparity between self and the human experience.”

Written in the aftermath of his debut joyride the stars, named FBi Radio’s Album of the Week in 2019, familial focus is once more at the fore of hearteyes’ second tape. Santiago again challenges collaborators to stand on the edge of their known musical worlds, tapping into alternate realms of autotune, lo-fi beats and PC Music-esque electronica. Olive Rush (Egoism), Antonia Gauci (GAUCI) and Separate Waysreturn, this time steered by Santiago’s vocals, anxiously attempting to rationale with everyday life and lucidity in the wake of his struggle with mental illness.

even headbangers get the blues surveys what comes after your lowest point. Carried by a distinct sense of openness, the tape follows the producer’s impulses and inspirations wherever they lead. Like fellow pop iconoclasts The 1975 and Billie Eilish, hearteyes too is a true child of our constantly connected culture, channelling his restless creativity into music without regard for boundaries or barriers – either personal or musical – in his quest for sincere and heartfelt communication.

even headbangers get the blues by hearteyes is out independently now,
buy/stream it here. 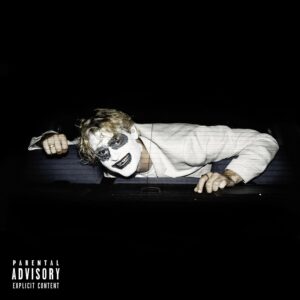