After a consolidating their status as the next big thing with some dynamic and powerful performances on their national tour last year, Gold Coast heavy alt rock trio In Eyes are preparing for huge 2020 with a much anticipated EP in the works slated for the second half of the year.Black Of Hearts caught up with lead singer Rosie Jacobson to find out what else can be expected from In Eyes in 2020 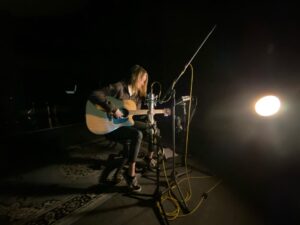 First up tell us about ‘In Eyes’, how did you guys meet and what inspired you to start a band?

In Eyes has been my passion project since the back end of 2014. The bass player from my previous band and I started it shortly after said band broke up. A few member changes later and it’s now Dylan, Kris, and I. Dylan joined the band in early 2015 and I met Kris through Uni and he joined in 2017. The three of us love each other like family.

I personally have been playing in bands since 2009 and could never give it up, so it was less about being inspired to start and more about not being able to stop.

How did you come up with the name does it mean anything?

Funnily enough, it doesn’t really mean anything. I was gifted a pair of skinny jeans from a mate’s Mum and it had In Eyes on a tag that had been sewn in. This was years before the band started, but it always stayed in the back of my mind.

Generally it starts with one of us writing a guitar riff or an instrumental, and sending it through to me to put the topline over it. Once the basics are down we’ll play it together live at band practice and workshop it as we go.

Who are your biggest influences?

My personal biggest influence is Hayley Williams of Paramore, and has been since 2009. Musically though, In Eyes is more inspired by Tonight Alive, Dream State, Hands Like Houses, and Northlane.

How would you describe your sound to people?

It’s always been difficult to describe but the easiest thing we’ve landed on is melodic alt- rock. We also say we’re similar to Tonight Alive and Dream State to give people some sort of reference context. Overall it’s heavy and melodic guitars and hard-hitting drums, topped with powerhouse female vocals.

We love your new single ‘Time Won’t Wait’ tell us about it?

Time Won’t Wait was written back in 2017. At the time (and still today) I was dealing with a lot of anxiety and wasn’t feeling confident mentally. Someone had told me in the past if I wasn’t signed by the time I was 25 I wouldn’t make it as a vocalist, and that scared me a lot. I now know it’s bullshit, thankfully.

The years between hearing that and my 25th birthday we’re terrifying me because time was ticking away and I wasn’t achieving my dreams. I landed on the sentiment Time Won’t Wait For You (because I’m sorry, but it won’t) and based the song around that.

For me now, it’s changed meaning slightly. Now, it’s representative of opening your eyes to the things you’re afraid of, and fighting for things you want with full energy because if you don’t you’ll regret it later. I like that it’s able to be taken either way, and probably more ways depending on each listener.

This is a loaded question. My all time favourite band and album is Paramore and their album Brand New Eyes. It’s a perfect record. I am also obsessed with The 1975, One Direction, Hands Like Houses, and Northlane.

If I had to recommend an album everyone should listen to it would be Hymns For The Non-Believer by Kisschasy. Another perfect record.

Is there a song you wish you had written?

Every day I hear songs I wish I wrote. The Goo Goo Dolls ‘Iris’, and Prince ‘Purple Rain’ are two of the best songs ever written. I’m currently obsessing over The 1975 ‘I Always Wanna Die Sometimes’. Brilliant piece of music.

When can we expect a full length album?

We’re hoping to pull together an EP by this time next year, but not putting any dates on it yet. Our band has a history of ups and downs so we’re taking it as it comes.

What has been the highlight for you guys so far?

One of the best shows we played was the Griffith Uni band comp in 2017. The energy in the room was off chops. Other highlights of course are things like getting played on the radio for the first time, and for me personally, just building the dynamic and friendships with Kris and Dylan. I couldn’t do any of this without them.

More songs, more shows; that I can almost guarantee. As I said we want to do an EP and I would love to go on tour. I’m trying to manifest it so, hello universe, a tour would be great please!

What is your New Year’s resolution?

Band related – keep up the pace and don’t slack. Invest in the project and put our whole hearts into it.

Personally – get my health in order, and spend my money more wisely.

If you weren’t in a band, what would you be doing today?

Honestly, probably trying to start a band. It’s the only thing I’ve really ever wanted. If it was completely off the table, I’d be running a venue/booking agency and putting on All Ages shows across the Gold Coast and Brisbane. Singing too; always, always singing.