IMOGEN CLARK ‘THE MAKING OF ME’

Singer-songwriter IMOGEN CLARK today unveils ‘THE MAKING OF ME’, the title track from her forthcoming EP, due for release on August 21 (Potts Entertainment/MGM).
The Making Of Me EP is available to pre-order NOW.

Watch ‘The Making Of Me’ below

To celebrate the release, Imogen also announces a series of live EP launch shows taking place at Brisbane’s Black Bear Lodge on Friday 21 August, plus two performances – 7pm and 9pm – at Sydney’s The Vanguard on Thursday 10 September.
Tickets for all shows are on sale now at imogenclark.com.au

Following her sold out Live From The Backyard virtual concert series last month, Imogen is thrilled to be hitting the road for real this August and September.

“Ever since these shows became a possibility, I’ve been buzzing with energy. Playing for fans is my lifeblood, and I’ve been itching to bring the new songs to life with my band! I’m working hard to make these shows extra special and the catharsis we all need right now”.

New single ‘The Making Of Me’ was written during a particularly dark time in Imogen’s life. “It’s about finding the strength to push through”, she says.

“I had no way of knowing when we recorded the song, that I’d be releasing it in the middle of a pandemic right as people around the world are facing their darkest hours. If you’re struggling right now, I hope this song speaks to you and helps give you the strength to keep going.”

Shot at Sydney’s Low 302 Bar in March, days before COVID-19 shut down all live music in Australia, the stirring music video for ‘The Making Of Me’ showcases Imogen’s vulnerable performance; the artist sits alone at a piano, pouring her heart out, to an empty venue.

“We filmed this video on the eve of Sydney’s lockdown, in a venue where I’d just played one of my favourite shows ever. It was eerie shooting in an empty room that had just a week earlier been packed with people enjoying live music.

“I wanted to help support all the great venues that have supported me over the years, so I’ve curated some resources for venues I’ve loved playing, or had planned to play before COVID; ways you can help support them so they can hang on until things return to normal”.

Recorded in LA and produced by Mike Bloom (Jenny Lewis, Julian Casablancas), Imogen Clark’s The Making Of Me EP features the likes of Alex Lahey, Clare Bowen Benmont Tench (Tom Petty and the Heartbreakers), Pete Thomas (Elvis Costello and the Attractions) and more across six tracks.

Lead single ‘Found Me’ and follow up ‘My Own Worst Enemy’ have already garnered praise from US and Australian tastemakers.

“With powerful vocals and an infectious drumbeat, Clark sets out to cure a broken heart. This breakup anthem will pick you up off the floor, dust you off and have you feeling ready to start seeing the world in color once again” – Parade

“… a song of defiance, strength and a bold celebration of her new-found situation. Imogen’s vocals carry you along on a euphoric wave of positivity.” – The AU Review

WATCH ‘THE MAKING OF ME’ MUSIC VIDEO HERE
STREAM HERE

PRE-ORDER THE MAKING OF ME EP HERE 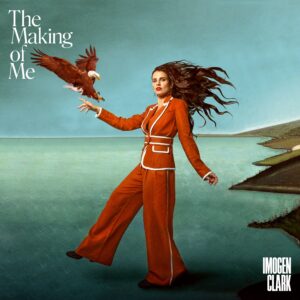 IMOGEN CLARK | THE MAKING OF ME EP LAUNCH CONCERTS
Information at imogenclark.com.au