IMOGEN CLARK ‘MY OWN WORST ENEMY’

+ THE MAKING OF ME EP AVAILABLE

Written with Alex Lahey, ‘My Own Worst Enemy’ is an arena-ready up-tempo pop-rock fusion, gritty and raw, showcasing Imogen’s powerful vocal. Lahey, who also lends guitar and synth to the track, is underpinned by music legends Benmont Tench (Tom Petty and the Heartbreakers)on cascading synths and piano, and Pete Thomas (Elvis Costello and the Attractions) on drums, both infusing the song with their own unique rock-flavour.

“I’ve been a fan of Alex Lahey’s since her first singles came out”, says Imogen. “We met in Nashville while I was writing and she was on tour, had some drinks at a dive bar and wrote ‘My Own Worst Enemy’ a few months later in Melbourne. We opened up a vein about shared experiences in past relationships and the song just flowed out. I loved writing with Alex, and I love having her DNA in the guitar and synth on the final recording.”

Released last month, Imogen Clark’s lead single ‘Found Me’ garnered praise from US and Australian tastemakers. “With powerful vocals and an infectious drumbeat, Clark sets out to cure a broken heart. This breakup anthem will pick you up off the floor, dust you off and have you feeling ready to start seeing the world in color once again”, said US pop culture site Parade, who premiered the track.

“… a song of defiance, strength and a bold celebration of her new-found situation. Imogen’s vocals carry you along on a euphoric wave of positivity.” – The AU Review

Through June, Imogen continues her ticketed LIVE FROM THE BACKYARD virtual tour. Having already completed flawlessly produced sold out acoustic and piano performances to rave reviews, she performs an electric guitar set on Saturday 13 June, culminating in a final performance on Saturday 27 June which will comprise a set-list of fan requests

Watch ‘My Own Worst Enemy’ below:

Tickets and details of how to watch the upcoming performances are available now at imogenclark.com.au.

Cutting her teeth playing in local pubs in the Blue Mountains of New South Wales before taking the stage with artists like Shania Twain, Ian Moss and Willie Watson, Imogen Clark has worked relentlessly over the past decade, building up her musical chops. She has worked with Mark Lizotte (Diesel), Kasey Chambers and Jim Lauderdale and now cites Benmont Tench (Tom Petty and the Heartbreakers) and Pete Thomas (Elvis Costello and the Attractions) amongst her collaborators, both appearing on the new The Making Of Me EP. 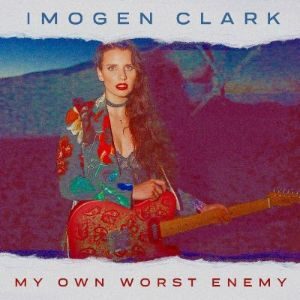