‘IN DREAMS’ EP OUT TODAY

Highly regarded both by critics & musical luminaries alike, including the likes of the Stone Roses, Spiritualized, Jack White, Noel Gallagher and Bill Ryder-Jones, Howie Payne has long been recognised as one of Liverpool’s finest and, to those in the know, possibly the best kept secret in British songwriting.

Listen to ‘Faster Than Light ‘ here

Speaking about ‘Faster Than Light’, Howie notes; “Really heavy, really catchy, and loads of groove is what it is. It’s the best rock and roll song I’ve done, I mean its a pop song really, like all the best rock and roll songs – we just delivered it in a heavy package. It has my favourite lead guitar break to play at the moment, especially the intro which has a bit of an Albert King thing about it. My guitar playing has always been heavily influenced by blues, but I don’t think I’ve really put it out front so much before, so I really do dig that this one has a bit more of that about it. It’s going to be massive live, and I can’t wait to play it.

The ‘In Dreams’ EP is the latest addition to a burgeoning solo career begun back in 2009 with Payne’s Ethan Johns-produced debut, ‘Bright Light Ballads’. Today’s EP release also includes another brand new track from Howie, ‘Fade Out, Fade In’ – a song that originates from a hazy period when his much-loved solo-project-cum-band The Stands were touring alongside Oasis. “The spark for this came from Liam,” recalls Howie; “It was late, like 3 in the morning and we were in a hotel bar somewhere after a show, talking about music and the kind of things you talk about at that time in the night. We were drinking Guinness and Champagne if I remember right, which I probably don’t. I remember Liam saying something about being born to kiss the sky, I think he might’ve been standing on a table, saying it to everyone in the room, anyway it just stuck with me as a beautiful thing, and it found its way into this song. Some of the other words come from that night, some come from others, but that night was the spark.”

Payne came to widespread recognition in the early noughties with the successes of The Stands, who – alongside Oasis – also toured with the likes of Paul Weller, The Libertines and The Coral. The band released 4 top 40 singles across two albums (2004’s debut ‘All Years Leaving’ and the following year’s ‘Horse Fabulous’), burning brightly before Payne disbanded the outfit. 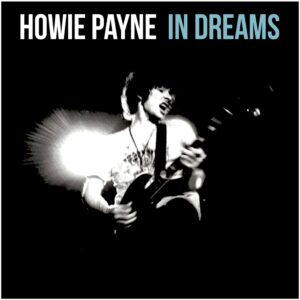 Fade Out, Fade In