It is with great pleasure that I OH YOU reveal the debut EP from Hayley Mary The Piss, The Perfume will be released on Friday 17 January 2020. To mark the occasion, Hayley has released ‘Ordinary Me’, a captivating ballad inspired by a love of the Celtic melodies of her Scottish motherland.

Premiered online via NME in the UK, ‘Ordinary Me’ is the follow up to Hayley’s debut single‘The Piss, The Perfume’, which premiered via triple j and Flood Magazine in the US. The track saw immediate support from Spotify and Apple Music both locally and globally, including playlist additions to Spotify US’s Fresh Finds and Apple UK’s ALT CTRL & Untitled and has been picked up by The 405, Paste Magazine, DIY Mag, The Line Of Best Fit and Idolator.

‘Ordinary Me’ sits in glimmering contrast to the Americana-influenced song that has been dominating Australian airwaves since its release in mid-October. Reminiscent of an early Dolly Parton folk song, ‘Ordinary Me’ is a gentle lullaby that draws on the traditional music of Hayley’s Scottish heritage. The way she warbles the word ‘mind’ – “As it goes on and on forever/Ordinary me, but with you on my mind” – adds an element of familiarity to a song that is so uniquely ‘Hayley Mary’.

VIDEO: ‘Ordinary Me’ by Hayley Mary

The Scottish landscape turned out to be a large source of inspiration for Hayley’s debut EP. Most of the EP was written while Hayley was working in Smith’s Deli, “the best caff, according to one local taxi driver, in Edinburgh.” She and her partner, Johnny relocated to the Scottish capital last year to live “the simple life” and explore the countryside of Hayley’s birthplace. “I got very in touch with my heritage living there and feel like I grew into myself a lot.”

Produced by Scott Horscroft (Silverchair, The Presets, Tkay Maidza, Middle Kids), The Piss, The Perfume fuses Americana, Australiana and punk songwriting with Motown inspired rhythms and soaring vocal style, resulting in a heartfelt collection of songs that pack a punch.

With the release of ‘Ordinary Me’ and instant success of ‘The Piss, The Perfume’, combined with the hugely successful 10-date regional tour with Alex Lahey that saw Hayley test out new material on live audiences, Hayley Mary’s debut EP is shaping up to be an Australian staple.

“Fall in love with the very, very good “The Piss, The Perfume”.” – Idolator

“The Piss, The Perfume” comes right out of the gate with a bombastic guitar riff. The song continues to meander down a path of sincere reflections, based around an old lover coming back to Sydney. Across the wistful chorus, Mary stresses simplicity, singing, “The less that I have / The more that I find.” – Paste 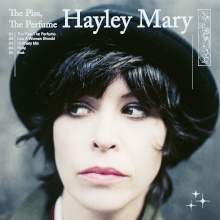 The Piss, The Perfume
Hayley Mary
EP out Friday 17 January
through I OH YOU
Available to pre-order here