★★★★ “A monumental shift in the right direction – it’s a record that is boldly more expansive and electrifyingly curious” – Dork
“Their most musically and thematically complex albums to date” – Life Without Andy
★★★★★ “An album you’ll die for… an extremely exciting, well-written, beautifully produced album that I doubt will be forgotten any time soon” – Indie Is Not A Genre
Sanctuary, the third full-length album from London’s Gengahr, has been released today and is available now. To support the album the band are headed down under with a tour of AU and NZ this March.
The critically acclaimed outfit’s third release has been hailed by UK music press, with BBC 6 Music choosing it as their ‘Album Of The Day’ yesterday, and Jack Saunders on BBC Radio 1 making it ‘Album For The Weekend’ this Sat/Sun. The band also wowed listeners with an exclusive live session for Radio 1’s Annie Mac, recorded at the famous at Maida Vale Studios – watch the electric session here.
Sanctuary features the single ‘Heavenly Maybe’, which is currently on rotation at triple j, is A-listed at BBC 6 Music, playlisted at BBC Radio 1, and is Greg James’ Tune Of The Week on Radio 1’s Breakfast Show. DIY called the track “a pleasing slice of indie-pop”; and Clash “an ultra-infectious new synth jammer”. The single reached #28 in Spotify’s UK Viral Chart.
Watch ‘Heavenly Maybe’ Below:
More expansive and ambitious than ever before, Sanctuary is the experimental alt-pop band’s finest body of work to date, a DIY triumph which welcomes old friend Jack Steadman of Bombay Bicycle Club as producer, adding his distinct brand of symphonic sparkle to Gengahr’s complex, layered sound and pushing the band further into all-out pop territory than they’d ever dared stray before. Recorded at the brand new Propagation House way out in Bude in Cornwall, the album also recaptures the magic that old school friends Felix Bushe, John Victor, Hugh Schulte and Danny Ward felt when they were making their debut.
Next month Gengahr will return to our shores for an Australian and New Zealand tour. This will be New Zealand fans’ first ever chance to catch Gengahr live, when they kick off the tour in Auckland. Don’t delay in grabbing your tickets to catch Gengahr live on stage in March! 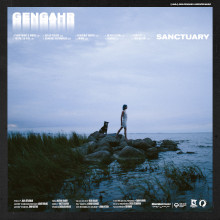