Having just wrapped up their sold-out UK tour, Gengahr are gearing up to kick off their Australian and New Zealand tour next month. With the tour just weeks away, Gengahr today have announced that special guests Green Buzzard will join them in Sydney, with Merpire sharing the stage in Melbourne.

From emotional rollercoasters to fully immersive, indie-rock arrangements, Merpire is the musical brainchild of Riannon Atkinson-Howatt. Conjuring magical moments in both the studio and on stage, Merpire and her predominantly female line-up have supported the likes of Julia Jacklin, Last Dinosaurs, Angie McMahon and Didirri, and entranced crowds at Bigsound, A Festival Called PANAMA and By The Meadow. Merpire will release the next single from her debut album, ‘Heavy Feeling’, this Friday (27 February).

Gengahr released their third full-length album Sanctuary last month. The album was hailed by music press, with triple j choosing it as their Feature Album, Jack Saunders on BBC Radio 1 making it his Album For The Weekend, and BBC 6Music featuring it as their Album Of The Day. Amongst these many accolades, Danny Ward from Gengahr has been crowned as having the Sexiest/Smoothest Voice from Jack Saunders on BBC Radio 1’s The Saunders Awards.

Sanctuary features the single ‘Heavenly Maybe’, which is on rotation at triple j, is A-listed at BBC 6 Music, playlisted at BBC Radio 1, and was Greg James’ Tune Of The Week on Radio 1’s Breakfast Show. DIY called the track “a pleasing slice of indie-pop”; and Clash“an ultra-infectious new synth jammer”. The single reached #28 in Spotify’s UK Viral Chart.

8/10 “Gengahr release an album that is bold, daring and dazzling with sheer pop excellence. It packs in a full bag of human emotion eloquently and sophisticatedly”

– The Line Of Best Fit

★★★★★ “An album you’ll die for… an extremely exciting, well-written, beautifully produced album that I doubt will be forgotten any time soon” 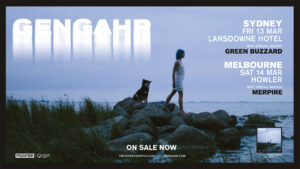