100s + 1000s is delighted to welcome local rising star Fergus James to their fresh faced roster with his latest single ‘Good Man’, the captivating follow up to his 2019 debut EP All Of The Colours.

Fergus James says ’Good Man’ is a step into deeper waters for him as an artist, something he finds truly exhilarating:

“Heading into this writing session I was feeling creatively exhausted and out of ideas, all I had was the opening guitar riff. But sitting in a granny flat in downtown LA with Nat, who is so creative and warm, we were able to bounce off each other’s shared ideas and experiences to build the sonic story you hear today. Paired with Frequency’s tasteful and world class production, ‘Good Man’ is a sonic step up from my established sound.”

2019 was a momentous year for Fergus James. The young troubadour played the main stage at Splendour In The Grass after winning the triple j Unearthed competition, completed his first headline tour (including a sold-out shows in Sydney and his hometown of Armadale, NSW) and released his debut EP All Of The Colours, which featured singles‘What Are We Waiting For’, ‘Back To Life’ and ‘Mistakes’, all of which took out the title of #1 most played song on triple j, and received huge support at Spotify and Apple Music (accumulating over 10 million streams to date). Bridget Hustwaite proclaiming, “[Back To Life] has that Dean Lewis charm and a Gang Of Youths kind of adrenaline. You know those songs that leave you feeling both breathless and full? This is definitely one of them”. 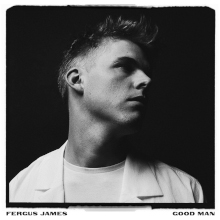 With ‘Good Man’, Fergus James delivers a world class anthem, emerging in 2020 a multi-faceted artist who is ready to show the world what he is capable of. Keep an eye on socials this weekend for a very special performance from the young artist.