In conjunction with triple j, today Australia’s rising star Dom Dolla announces his biggest Australian headline tour to date. Having already sold out Melbourne’s Coburg Velodrome on 1st February, Dom Dolla is taking his live show to his loyal fanbase in metro cities around the country this May. Captivating audiences nationwide with stellar performances at Australia’s premier festivals Listen Out, Beyond The Valley, Field Day, Spilt Milk and Wildlands, Dom is excited to share the next step in his career, with some very special guests to be announced soon. The extensive tour will see Dom take over Adelaide’s Thebarton Theatre on May 1, before skipping over to Perth for a heaving show at Centenary Warehouse on May 2. The acclaimed producer will then head to Sydney’s iconic Hordern Pavilion on May 8, before wrapping up the tour at Fortitude Music Hall in Brisbane on May 9.

Eagerly anticipating the forthcoming shows, Dom shares, “I couldn’t be more excited to step up the show for Australia. You have supported me since day one and it means the world to be able to perform at such world class venues like these around the country. I can’t wait to join you all for a disco. Let’s do this.”

WATCH ‘TAKE IT’ BELOW:

A staggering year for the Melbourne native following the release of his festival anthems ‘Take It’and ‘San Frandisco’, Dom Dolla has continued to explore his creative outlets with outstanding remixes for Dua Lipa, Hayden James, MK & Sonny Fodera, and Purple Disco Machine to name but a few. The last 12 months alone, has seen Dom pool in over 100 million+ streams, score his 2nd ARIA Nomination, a gold record, consecutive weeks as most played song on triple J, debuting on triple j’s Hottest 100 at #33 with ‘San Frandisco’, and back to back ARIA club chart #1’s. Further solidifying his global domination, the producer has earned worldwide praise and accolades, seeing him named Pete Tong’s ‘Future Star of 2019‘, Billboard Dance ‘Artist To Watch‘ in April, Dancing Astronaut’s ‘Breakout Artist of 2019′, and a feature in EARMILK’s ‘Best of 2019′.

With international demand quickly building for the prolific producer, the forthcoming shows, will be his only solo headline shows in Australia for 2020, as he pursues international waters. Having already been announced to perform at one of the world’s most renowned festivals, Coachella Music and Arts, Dom is scheduled to perform throughout the US, Canada, UK, Italy, Netherlands, Belgium and the Bahamas.

Further promising a plethora of new music for 2020, be sure to keep your eyes firmly on his socials for more announcements coming soon. 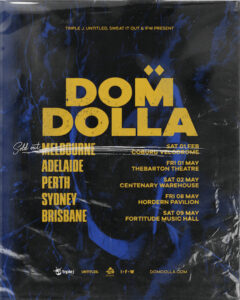