It is with immense pride that 100s + 1000s today release Little Demons, the debut EP from Melbourne-based artist D’Arcy Spiller, with her unheard showstopper ‘What In Hell’taking centre stage of the release.

Premiered overnight via Clash, ‘What In Hell’ comes with the eerie video directed by Marie Panguad and shot in a small town in rural Victoria, elevating the tracks darker themes to new levels. As the EP’s centrepiece, ‘What In Hell’ was written during a transitional period – as most great songs are – in which Spiller found herself at a crossroads. The philosophical song could be a cry out to the Gods, a spell cast on a former lover or a personal mantra, as D’Arcy masterfully wields her unique vocals, switching between an angelic soprano and a guttural rasp that would make even the coldest soul take notice.

“’What in Hell’ is about duality in the journey to self-discovery. There are moments along the way, where we battle to ignore our inner truths, but eventually we find parts of ourselves we never knew existed. The video expresses the internal struggle of balancing light and dark. There are darker undertones the universe tests us with, wanting us to give in.”

Watch ‘What In Hell’ below

Little Demons is a collection of five songs that transport you to some achingly familiar places within oneself. The sometimes tender, sometimes driving compositions deal with hedonism and hurt, built around a voice that is instantly unique, all her own, equal parts robust yet delicate. Lyrically, Little Demons has proved to be a personal exorcism. Along her musical journey, D’Arcy worked with a handful of collaborators and musical kins to create the stories as revealing as tarot cards. “I wanted to make something dark and beautiful,” she says, “for everyone else who has those dark spots.”

D’Arcy Spiller first burst onto the scene in late 2019 with her crushing single ‘Cry All Night’which debuted on triple j Unearthed and was met with an outpouring of glowing reviews from hosts including Declan Byrne, Claire Mooney and Max Quinn. The track peaked at #9 on the station’s Unearthed chart and led to her touring the country with label-mate and rising star Fergus James on his headline tour – a mutually complementary pairing that wowed crowds across the country. In January, D’Arcy released her powerful follow up ‘Wildfire’ with the news she had signed to 100s + 1000s, closely followed by the spine tingling ‘Deep Black Sea’ which earned her triple j Unearthed Feature artist and was added to rotation at triple j, an impressive feat for the fresh faced artist.

Little Demons dips into the deep pool of D’Arcy Spiller’s raw talent and musical capabilities. There is so much more to come from the young singer-songwriter and this intoxicating EP is just the beginning. 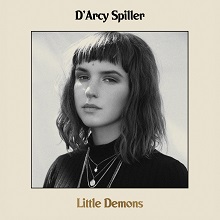