Alternative rap duo Craterface share ‘BIG WHEELIN’’, the first single to be lifted from their forthcoming mixtape BURN AFTER LISTENING, out this October. Listen HERE.

Best served loud, on ‘BIG WHEELIN’’ rapper baby bruh and producer/vocalist Taki Local channel the kicks of driving aimlessly, unsupervised for the first time, with the rush of freedom that comes from owning your first car. Inspired by Ramirez’s ‘Gold Thangs and Pinky Rings’, they share: “We wanted to make something to put on in the whip while riding around in the sun.”

Patiently honing their craft in bedrooms and basements since 2016, Craterface emerged late last year with their debut release Don’t Be Confused, named packet album on Sydney’s FBi Radio. The duo have steadily kept audiences guessing since, following up Don’t Be Confused’s lead single ‘LEXAPRO’ with a string of releases: ‘-12°’ with fellow Novacastrians FRITZ and Aquinas, ‘Bankroll’ and their collaboration with teddie on ‘Call Me’, following their tour with Shady Nasty in February.

Where their collaborative approach is forged in trust and a mutual understanding built over a decade long friendship, Craterface’s sound pivots from the method-madness of JPEGMAFIA, tenderness of Deb Never and Matt Champion, to the avant-pop mania of SOPHIE, with all music mixed and mastered in house.

With an M.O. to blow up while keeping things DIY, baby bruh and Taki Local carefully curate each element of their craft at home, comfortably keeping their own feet on the gas. Now with the upcoming release of their confessional tape BURN AFTER LISTENING, Craterface explore spiritually, heartbreak, cyclical growth and finding self love, while wearing Newcastle on their sleeve. 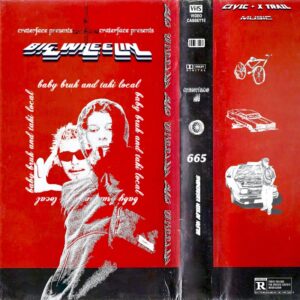 ‘BIG WHEELIN’’ by Craterface is out now, buy/stream it here.