At the age of 23 year old, songwriter and producer Carda (Adrian Cardamone) has achieved what most would hope for in a lifetime. Accumulating more than four million plays across all platforms and no stranger to commercial radio rotation, Carda is in prime position to release his latest effort, featuring Emily Falvey (out January 24)

Framed as an introspective look at a regrettable physical relationship from the female perspective,‘Wasted’ had its genesis as a cross-continental collaboration between Melbourne and Nashville. Written as an apology letter, the chorus lyrics best describe the tone of the song: “I’m sort of ashamed that I let you pull me close just to let you go”. Inspired by the likes of other pop-EDM cross over artists such as The Chainsmokers, Jonas Blue and Martin Garrix, Carda utilises emotive imagery and conversational lyrics to add a charming depth to this slick pop-dance production.

“This song is the most powerful story I’ve told thus far, which makes this release so exciting”

“My music plays on the contrast between an emotional, powerful story with uplifting, feel-good production.”

Paving his way with an unmistakable sound, ‘Wasted’ offers an exciting glimpse of what is to come for the Melbourne artist. Having spent so many years honing his sound and perfecting his craft, Carda is ready to well and truly take centre stage in 2020

Born and raised in Melbourne, Carda sparked a passion for songwriting at an early age. Training in both piano and voice as a child has enabled him to develop a unique appreciation of the creative process with his love for contemporary lyrics and melody allowing him to express his personality through the melodically-driven style that guides his productions. With exciting projects in the works, enjoy Carda’s new expression of electronic pop and dance music 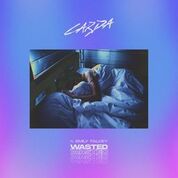