IN APR-MAY FOR HEADLINE TOUR

Frontier Touring and Illusive Presents are excited to announce the return of 16-year-old rap prodigy Bhad Bhabie, performing four headline shows in Australia and New Zealand in April/May 2020. These will be her first headline shows on our shores in two years, Bhabie is also on the line-up for the recently announced Groovin The Moo.

Can’t wait to come back. Had so much fun there last time. Ya’ll fr crazy.’ – Bhad Bhabie

Breaking into the scene at 14 with her debut single ‘These Heaux’, Bhabie has transformed into a platinum-selling hip-hop sensation, boasting global scale fan adoration and sold-out shows across the world. In late 2019, music authority Billboard listed Bhabie at #8 on their 21 Under 21 list, thanks to her 897m+ streams to date, following on from a #6 ranking in their 2018 poll (528m streams).

The Florida-born, Los Angeles-based rapper will bring her brash and brazen bars, clever choruses, and attitude for days to Auckland venue The Studio on Thursday 23 April, followed by Melbourne’s 170 Russell on Thursday 30 April, Brisbane’s Fortitude Music Hall on Wednesday 6 May, and Sydney’s Metro Theatre on Thursday 7 May.

Off the back of her debut mixtape 15 (2018), which included RIAA Platinum-certified single ‘Gucci Flip Flops’ ft Lil Yachty, Bhabie headlined five shows across Australia and New Zealand and sold out all dates on her Bhanned In The USA tour across North America and Europe. She earned herself a 2018 Billboard Music Award nomination for Top Rap Female Artist, and secured her position as the youngest female rapper to ever chart on the Billboard Hot 100.

‘A captivating and cunning artist… She has a surprising command over flow that often escapes artists her age, handling breath control and cadence with a veteran’s confidence.’ – High Snobiety

In response to ‘Babyface Savage’, Billboard affirmed that, “Bhad Bhabie seems to only be steadily improving the deeper she goes into her burgeoning career.”

Don’t miss your chance to experience Bhad Bhabie’s return to Australia and New Zealand in April and May. Tickets will go on sale Thursday 27 February at 12 noon (local time) via frontiertouring.com/bhadbhabie.

While in Australia, also performing nationally at Groovin The Moo 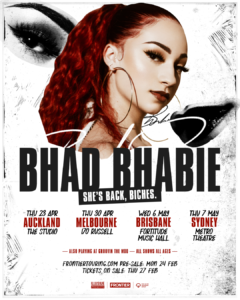