Melbourne-based avant-pop artist Bel reveals an inventive and trailblazing piece of art — a unique spoken word video, directed by James Mountford (BANKS, Chance The Rapper), foregrounds Bel’s talent in poetry and showcases her versatility as an artist — WATCH HERE! / below
Titled “T1”, the piece, written and co-produced by Bel, serves as an introduction to her upcoming “Trilogy” EP, tying together a trilogy of singles, which include the already released “Better Than Me” and “Spectre”, and the upcoming track “Good News” — PRE-SAVE HERE! By fusing samples and instruments from all three singles into one expansive soundscape, Bel’s evolution as an artist from her first release to today is made complete.
“‘T1’ is my purple cow.” Bel shares, “there is nowhere to hide. No fancy production or slick beats. It’s just me, my incentives, my desires, my view on it all. Join my world and understand the house I am trying to build. Every word from ‘T1’ comes from the depth of my soul and whilst it’s terrifying, I am excited to share my goals, incentives, plans, vulnerabilities  – for present and future – as crystally clear as this.””

Bel began her year with the release of “Better Than Me” (watch here); the track’s sleek production and syrupy charm made it a song not just to be listened to, but one to be consumed through all the senses. Marrying the avant-pop and experimental realms, Bel’s second single “Spectre” (watch here) catapulted her to the forefront of Australia’s female pop ranks. “Spectre”, produced by Konstantin Kersting (Tones and I, The Jungle Giants, Mallrat), was a fearless return from an artist always on the cutting edge of sound and visual artistry. Bel worked on the “Spectre” music video with James Mountford, the creative director for BANKS and Chance The Rapper. The resulting art-house meets fashion film exemplifies Bel’s unique visual artistry and intense introspection, making comment on the demanding and often falsified nature of the fashion and music industries.

Bel is an artist born from a supernatural cataclysm; a mysterious young woman, she exists in a world of her own design, where the ugly and raw nature of the world is not looked at through rose coloured glasses. No veil to hide imperfections. Instead, she celebrates them, unashamed and unwilling to compromise in her approach. A fire burns deep within Bel and fuels her to march forward, refusing to back down when it comes to her dreams and desires. 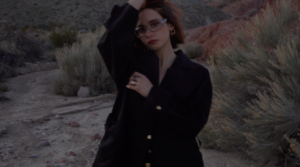 “Bel creates a dreamy world of her own: real authentic with no veil to hide imperfections.”
– IRK MAGAZINE
“Marrying dark pop and experimental realms, Bel’s lyrics take on a fearless attitude.”
– SUBSTREAM
“…doesn’t exist just to be listened to; it is meant to be consumed through all the senses.”
– SICKY MAGAZINE
“Beautiful is an understatement…. It is sensual, powerful and it draws you to Bel’s world of metaphors symbols imbued with the fusion of art fashion and music.”
– A BOOK OF
“…proves she is worth paying attention too… assertive in her message…who rejects genre conventions and exists as an amalgamation of art, music, creative direction and fashion.”
– FEN HONG SE MAGAZINE
“Bel defies all genres.”
-WOMEN IN POP
“There’s something truly striking about Melbourne’s newest pop icon”
-PURPLE SNEAKERS
“… a woman with a clear vision and direction for this project, mixing the art and fashion worlds with her music.”
-PILERATS
Follow Bel