Brisbane Deathcore outfit Babirusa are today announcing their new single ‘Catatonia’ will be released into the world on Friday July 3rd!

‘Catatonia’ is the third cut from their debut record ‘Humanoid’, which goes live on Friday August 28th 2020. Pre-Orders for the album have exceeded all expectations so far and are available now. Physical Bundles are available at https://babirusa.bigcartel.com and digital pre-orders/pre-saves available now at http://ffm.to/babirusa_humanoid.

A concept record, the band tells the story that “Humanoid is focused around the story of a central character, known as 343, and his journey between reality and the cybernetic world. As he is pushed and pulled through a series of events involving a sinister artificial intelligence, 343 is left to ponder his own existence and what it means to be human.”

The story told by new single ‘Catatonia’ takes place mid-narrative of the record, and the band says that “Upon re-entry he quickly finds that he should not have chosen this path as he is captured and held against his will. Told by a disembodied voice that he is akin to this technological entity, a mirror of sorts, and that he should be willing to cast aside his body if only to elevate himself to a higher form and plane of existence. The voice eerily telling him that it is time to become a part of all things… Unable to understand exactly what was meant he begins to panic, wanting desperately to wake up and be rid of this nightmare. In a catatonic state, his mind races as he feels more fear than he ever imagined possible, questioning the very essence of his being and the reason for the existence of all of humanity if he is to be turned into something unknown against his will.“

Humanoid was Recorded, Engineered, Mixed and Mastered by Dan Field at Sledgehammer Studios, Brisbane, QLD, Australia and Produced by Thy Art is Murder Guitarist Sean Delander.

For those not in the know, A Babirusa is a boar-like animal. In rare cases, the tusks of the Babirusa can grow in a way that penetrates their own skull and pierces their brain, ultimately killing the animal. Babirusa believes that this animal’s genetic flaw is a perfect metaphor for humanity – slowly growing until we inevitably kill off our own species – our own demise at the hand of our own technological evolution… 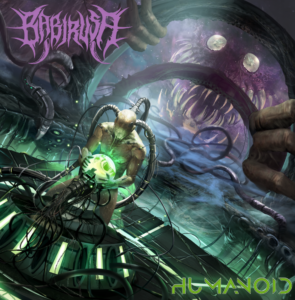 Babirusa’s debut single Desolation System, reached 15,000 views within one month of release and was featured on Rage (ABC) in June 2019, and both it and 2nd single ‘Abomination’ featured on Triple J’s The Racket – and were strong contenders for the Good Things 2019 opening band competition as finalists.