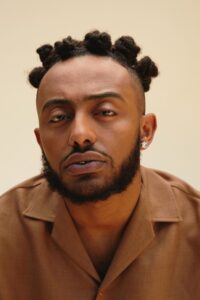 Aminé, born Adam Aminé Daniel, alongside co-producer, Pasqué, threaded together a dynamic and diverse statement piece in ‘Limbo.’ To herald the record, via the voice of friend and writer/comedian Jak Knight, he introduces “Burden” by saying, “This is some shit you go and pick your homie up from jail with” as hypnotic harmonies and live guitar fuel throwback East Coast-style bars rife with clever lines and vivid storytelling. It dips into emotional confessions such as the spoken-word interlude “Kobe” where he admits, again via the voice of  the ABC Black-ish fame Jak Knight, “It weirdly fast-forwarded my maturity,” in reference to the tragic passing of Kobe Bryant. Organ resounds through “Roots” where his tightly wound rhyme-craft takes the spotlight. Everything culminates on the finale “My Reality” where heavenly choir and strings collide in one last soulful strut.
Aminé set the stage for ‘Limbo’ with anthems such as “Shimmy” (13.1 million Spotify streams — WATCH HERE), “Riri” (9.2 million Spotify streams — WATCH HERE), and, most recently “Compensating” [feat. Young Thug] (4.8 million Spotify streams). Welcome to LIMBO now.
Stay connected with Aminé