Five piece pop-punk Brisbane band All Hours are back with their brand new single “Black Rose”. Building on their previously released material, All Hours have taken their poppy melodies, frenetic riffs and energetic instrumentation and produced the first offering off an upcoming EP currently in the works.

Black Rose”, produced, mixed and mastered by Stewart Whiteley and Callan Orr of Avalanche Studios (Dream On Dreamer, Ocean Grove, Young Lions, Stepson) is about the breakdown of a tainted relationship. The music video explores the themes of the track with characters portraying the hurt that accompanies a failing relationship, produced and directed by Jonathan Creed (CrackerJacPictures) with additional editing by Luke McClean (Shots For Bands)

Influenced by rock heavyweights such as Paramore, A Day to Remember, Blink 182 and Sum 41, the gang bring their energetic spin to the genre with female-vocalist Dani O’Grady at the helm. 2018 saw a fresh line up, with guitarists Richard Bayliss and Alistair Franklin joining O’Grady alongside Stewart Whiteley (bass), and Jono Creed (drums).

Individually, the five played with a number of Brisbane outfits for 10 years before combining talents to form All Hours in 2015. Bringing the full force of their experience to their energetic live shows, the band are well versed in playing the local Brisbane circuit. All Hours have released two EP’s and most recently covered Amy Shark’s hit “I Said Hi”, which gave the tune a second lease on life with the addition of the band’s signature heavy spin. Following this, All Hours released a film clip for their single “Saving Grace” which they supported with shows for the first half of the year. The band have dedicated the past six months to writing and recording a new EP, with details of release still to come! “Black Rose” is the first to be released off aforementioned EP.

Black Rose” is out now and available on all digital and streaming platforms. The brand new singlewill be launched at Schema Festival alongside some of 2019’s favourites from the likes of Void Of Vision, Windwaker and The Brave. Tickets on sale at Oztix! 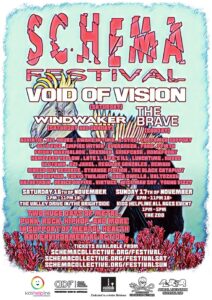