RETURN WITH NEW SINGLE “UNFAVOURED” AHEAD OF WINDWAKER SUPPORT SLOT

Adelaide’s Alda Sky are back with their ferocious new tune “Unfavoured” ahead of jumping up to support Windwaker on their Adelaide leg of their headline tour at the end of November!

Alda Sky bring soaring light and perfectly contrasted dark shade to the table with “Unfavoured”, the band’s first release in over two years produced mixed and mastered in Melbourne by Chris Lalic (Windwaker). Lyrically, “Unfavoured” addresses the inherent need to feel wanted and connected in amongst a world that is so connected that one voice simply becomes white noise in a void of billions more.

Vocalist Josh Badcock highlights the motivation behind the new single in saying that “all the while we suffer as rejects and second class citizens, we witness the ruling elite impose systems of fear and control, whilst the world fights itself over irrelevant issues. Dealing with all of these issues, it becomes a struggle knowing who to trust and whether trying to live a ‘normal’ life is better than looking for the quickest way out.”

Alda Sky is Josh Badcock (vocals), Jake McDonald (guitars/vocals), Drew McDonald (guitar), Ben Maule (drums) and Rhys Ritchie (bass/vocals) and together the five-piece released their debut EP ‘Reflections’ in 2017 which paved the way for a couple of years of climbing the ranks in the Australian hardcore scene, building themselves a solid fan base and a loyal live crowd.

Alda Sky have earnt themselves support slots alongside fellow Australian heavy bands including Windwaker, Ocean Sleeper, Mirrors, Life Pilot, Diamond Construct, Days of Deceit and The Daily Chase to name a few. Alda Sky have built a reputation for their fast paced, melodic metal grooves and climactic rhythmic chorus’ and are excited to end the year with the unveiling of their brand new progressed and mature sound. Don’t miss the band playing support for Windwaker in Adelaide at Enigma Bar Friday November 22 with Diamond Construct and Heartline. Tickets available through Moshtix!

“Unfavoured” is out tomorrow and will available on all digital and streaming platforms, stay tuned for new Alda Sky in 2020!

TICKETS ON SALE NOW AT BIT.LY/WINDWAKERTICKETS 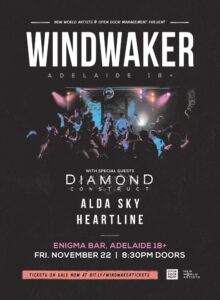