It’s with great pride that we at Pieater announce the third LP from #1 Dads – Golden Repair. Listen HERE.

Every album Tom Iansek creates makes for a curious study: will he be flexing the production muscle; experimenting on the fringes of what’s pop; grappling with the human condition…? Under the #1 Dads moniker it’s the humble melody and sincere story-telling that takes centre stage. More than ever on Golden Repair, Tom has allowed the simple essence of the songs to remain unadorned, while still keeping the trademark warmth, ease and approachability that the project is well loved for.

The first single ‘Another Day‘ came out in November, along with a self-made video by Iansek. Watch below

Tom has provided a lovely introduction to the purpose behind the album: “This album Golden Repair is so named after the Japanese artform ‘Kintsugi’, in which broken pottery is restored with a gold lacquer, artfully emphasising the cracks. It celebrates the blemishes, rendering the piece richer and more beautiful than before.

This album has formed part of my own restoration as I have grown as a person and as an artist and continued to peer deeper into myself, not necessarily liking or being able to accept everything that I find. It is thus an album of light and shade, of death and new life, and that path we continually walk towards the latter. It is a conscious exploration of the process of healing, and a pondering on suffering and its role in the process of life. It is the breaking and subsequent golden repair of myself and those closest to me.

‘Elizabeth’ is a song I wrote for my wife and her family whose mother passed away after a long battle with cancer. The melody came as I sat at their family piano one evening during a tough visit in her final stages. Bearing witness to the process of physical decline and death touched me deeply. A year to the day after her mother’s passing, my wife found out she was pregnant with our first child – to which the song ‘Run’ is dedicated – and so the cyclical nature of life impressed itself on me; grief and celebration occurring simultaneously.

The theme of patience also emerged during the writing, perhaps in response to a general anxiety to get to my destination quicker than life is willing to allow. With this anxious energy I would sit at the piano every morning, but would soon feel blocked. At some point two notes would come to me, which I began to repetitively play with my left hand. I would then improvise gently with my right hand – it was the sound of a beautiful holding-pattern. When it came to an end other ideas flowed more freely. Every morning when I didn’t know where to start I would play this I eventually turned this into the song ‘Patience’ in honour of this morning ritual and exercise.

Ultimately though it is an album of love, in all its forms, and its gentle emergence from the dark and dusty corners of ourselves. ‘Twice A Fool’ speaks to this well. It is a song I wrote about my brother who, at breaking point with work and a very long-distance relationship, decided to quit his job and move from one side of the USA to the other to marry and be with his partner.

It is my hope that the listener sees pieces of themselves in these stories, that the musical contours encourage a space of gentle introspection, and that it uplifts and inspires.”

Golden Repair is out now via Pieater – stream it here.
For our Australian community radio friends download tracks via Amrap here. 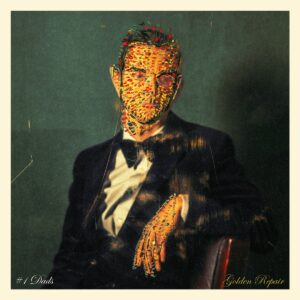