Roll erp! Roll erp! Yours and Owls 2022 lineup is here! Come one, come all! A collection of the most extraordinary Oceanian live acts, descending on Stuart Park in Wollongong April 2 and 3, 2022.

Let’s get this live music circus rolling. Prepared to be enchanted with astonishment by performances from:

Plus DJ’s at Das Schmelthaus

Ten ARIA Awards; 6 consecutive #1 albums; sold-out arena tours, and over 50 x platinum accreditations throughout their career so far. Every studio album from 2006’s The Hard Road onwards has debuted at number one – they even picked up a number one debut for their Remix album (Drinking From The Sun Walking Under Stars Restrung).

They’ve consistently racked up multi-platinum sales in an era when the industry is seeing sales dwindle across the board. They’ve also been a consistent and powerful live act throughout Australia, Canada and Europe, and even took hip hop back to its birthplace in the US. The legacy of Hilltop Hoods is undeniable; they helped propel hip hop as a local genre in Australia; we are thrilled to bring them to the Gong in 2022.

Travel restrictions prevented Aotearoa breakthrough pop sensation BENEE from joining us in 2021. We are stoked she can make it for the 2022 edition! Already her tale is one of eye-watering statistics and achievements: close to ten million TikTok videos made to her latest single ‘Supalonely’ featuring Gus Dapperton, hundreds of millions of streaming numbers, the most added song on U.S. Top 40 radio and a collection of platinum records in her home country. Her audience seems endless.

An incredible career with multiple ARIA nominations, multiple ARIA #1’s, and a long list of accolades, hip-hop giants Bliss n Eso will bring tracks from their 7th studio album The Sun alive on stage at Y & O! The Sun is the massive follow up to 2017’s critically-acclaimed album Off The Grid, that featured their triple-platinum smash hit single ‘Moments (feat. Gavin James)’, which has amassed 60+ million streams across platforms and received the ARIA Award for Best Music Video. Selling close to half a million records in Australia alone, a reputation for their consistent epic live shows and one of the most loyal fanbases in the country, we can’t wait for them to land at Stuart Park in April.

Flight Facilities were founded in 2008 off the back of the Sydney club scene at its peak. Their first release, Crave You, became the unofficial soundtrack to summer parties. The pair has spent the majority of their careers bucking trends in electronic music, consistently and reliably favouring the timelessness of a well-crafted song. Their 2021 release ‘Lights Up’ marks the beginning of a new chapter, and much more promised to come this year. We’d say Flight Facilities are back, but they never really went anywhere, and after sound tracking the last ten years for their fans, they’re settling in for another decade to come. Flight Facilities forever!

With over 350 million streams worldwide and growing, Brisbane’s The Jungle Giants are fast becoming an unstoppable force. Known for delivering explosive, high-energy live performances. With the release of their #1 ARIA-charting fourth album, Love Signs, The Jungle Giants are channelling hope, love and a dance-pop sensibility into their most irresistible and genre-defying work yet. Driven by optimism, creative freedom and a desire to “go weird, go funny, and not be scared,” they are paving the way for their continued metamorphosis.

While we have always loved them as a loose-unit electronic act, the moment Adam and Reuben emerged from behind the decks and channelled their antics into the glorious shitstorm of energy that is a Peking Duk live show was the moment Peking Duk became legend. Over recent years, Peking Duk has taken their live show far beyond Australian borders, performing to sold-out crowds in venues and festivals across the US, UK, Asia and Europe.

Now with electro-smash ‘Nothing To Love About Love’ in the arsenal for 2020, the sky ain’t no limit. But no matter how high the Duks fly, they’ll always keep one foot in the sticky mosh from whence they came.

After several years of playing the part of “those kids who don’t seem to fit in anywhere” with their first two records (2008’s We Don’t Belong Here & 2010’s self-titled), Violent Soho finally announced themselves into the public’s consciousness with 2013’s Hungry Ghost. But now, with Everything Is A-OK (2020), Mansfield’s favourite sons have drawn a metaphorical line in the sand: five albums into their career, equipped with a renewed self-confidence, they know not to follow a rule book written by other people. Violent Soho are still four blokes from Queensland who just want to shred some riffs, play some shows and make the music they love. Their music. And this is them at their best.

Faker was formed in Sydney in 1996. Their second album, Be the Twilight, was released on 17 November 2007. It has thus far peaked at No. 24 on the Australian ARIA Albums Chart. The first single from the album ‘This Heart Attack’ was released on 27 October 2007. The song has peaked at No. 9 on the Australian ARIA Singles Chart and also reached No. 5 on the Triple J Hottest 100, 2007. In 2013, frontman Nathan Hudson announced the band had broken up. Seven years later, in October 2020, Faker announced on their Facebook page that they would be reforming for a late-career comeback… in 2022; we can’t wait to reignite our love affair with them at Y & O!

You can deep dive into the rest of our lineup here.

So, what can you expect from the Yours & Owls 2022 April edition? It will be bigger (larger site and more people), better and back at our spiritual home by the sea, Stuart Park, Wollongong.

We kinda fell in love with those autumnal April feels this year, so ya’ll already know what that temp brings! Aint nothin’ like a #GongChristmas two weeks before Easter!

We will, of course, be in constant contact with the relevant overlords every step of the way to make sure we deliver you one of the best events to date in the safest way possible.

Sign up for pre-sale and enter the chance to win: 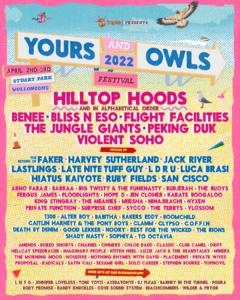 CONNECT WITH YOURS AND OWLS