BARES ALL ON POWERFUL NEW SINGLE ‘OUR NEIGHBORS.’

Off the back of his highly praised debut EP ‘with you in mind’, will hyde has made a triumphant return in 2021 with the release of his coming-of-age single ‘boy.’ With support flowing in from presenters across triple j, Unearthed, whilst also seeing airplay across US and the UK on Amazing Radio, and Apple Music’s The Travis Mills Show, will hyde has once again proven why he is one of the most exciting young singer-songwriters to watch.

will hyde · our neighbors.

Once again opening up about the realities of life through his honest dialogue. Today will hyde releases the powerful new single and music video for ‘our neighbors.’ ahead of the release of his sophomore EP, out later this year via Pack Records. The new single highlights the feelings of anxiety, paranoia and self-doubt that can be felt throughout the breakdown of a relationship.

However, in true will hyde style,  the polished pop production adds a glimmer of hope to the story within, almost as though peace has been found in the turmoil of the relationship’s demise. Accompanying the release is the second chapter of a visual story; following on from the home video footage of growing up seen in ‘boy.’ The video follows  a now grown will as he peeks in on himself watching memories of a past relationship.

Written alongside 2021 GRAMMY winner Mike Waters (John Legend, Demi Lovato, Louis Tomlinson, Grace VanDerWaal) and Joel Quartermain (G-Flip, Dustin Tebbutt). Will details how the song came together, sharing, “it started off as four chords that I played for Mike and Joel, and a chorus that I had sung that had the words “I feel sorry for our neighbors…” We all felt like the concept had a lot of potential. I remember I came up with that line one night when I was sitting in bed – one of our neighbors must have been arguing and I imagined what it would be like to realise someone was listening in on such a raw moment that they had.

The song is more so a concept rather than a real life scenario in that sense. I also feel like I’m going crazy if I’m stuck in a toxic, never-ending cycle within a relationship – so that is something that I wanted to show with this record.” And in speaking directly to his fans he continues “I hope this song can comfort anyone that is feeling stuck in a relationship and lost with themselves because of it. You deserve to be happy so get out of that shit!” 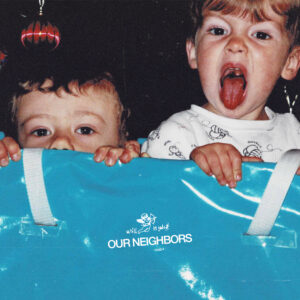 will ’s new single ‘our neighbors.’ is out now on Pack Records.

For more info on will hyde, visit: