WHO IS VINNY? THE

Armed with infectious bass lines and vocal swagger that is intriguing as it is seductive, Melbourne trio VINNY return with brand new single, ‘Fire’. As their second release for the year, the group have taken a deep dive into some sharp and edgy rock vibes, flecked out with funk and indie influences.

Fire’ is the perfect starting point for newcomers to the VINNY sound and with its release, the band says ‘Welcome’; let the music wrap you up as you get your head around who this band is at their core.

And who is VINNY at their core? Self described as forming from ‘the pits of a dark neon lit disco church’, the band is vocalist/percussionist Josh Aubry, guitarist/synths player Jim Stirton and guitarist Tony Clay. Together, the band’s influences range from hedonistic images of a Studio 54 mythology, the seedy dancefloors of Melbourne’s clubs and slick sorts of soundtracks that can only be found in Spaghetti Westerns. The music’s over the top and drenched in grooves and tight in its delivery, testament to the band’s history of writing and performing with one another.

Debut track ‘Chaos’ was released back in May and it was just as the title indicated; a hectic way for VINNY to make their presence known. ‘Fire’ takes things a step further, giving the listener an outlet to let their hair down and immerse themselves in the melodies and confident arrangement.

As to where ‘Fire’ came together? VINNY reminisces on a chance encounter in a setting far, far from Melbourne’s inner city suburbs.

“We had this groove and feeling in our bones. We were lying poolside sipping pina coladas, watching the sun go down when out of nowhere, a topless, coconut-oiled man walked past us down to the beach playing his saxophone, shooting fire out of the bell (thus the name, ‘Fire’). We befriended him and asked if he would come into the studio that night to help us finish off the track. We worked throughout the night and finished the song by sunrise.” VINNY 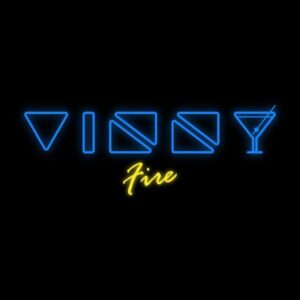