Darwin based metal band We Burn Bridges have been on pause for a couple of years but have today emerged from hibernation to unleash hell on their new single “Predator“, inspired by the 80s film of the same name.

Produced mixed and mastered by the band themselves, “Predator” is a return to form for the quartet. “We chose Predator to be our leading single as it encapsulates the classic We Burn Bridges sound but pushes into darker, heavier, moodier territory,” explains the band. “It’s invigorating for the band as we delve into new grounds of collaborative song writing and experimenting with sounds we never have before.”

Inspired by classic action and horror films, “Predator” features musical and visual throwbacks to the original movie. “As a band we have an admiration for 80s action and horror movies, so much so that we surround ourselves with vintage film posters of that era and draw heavy inspiration from the artwork and vibe these retro films of yesteryear are so good at creating.”

While Darwin is known for its heat and yearly monsoon season, it’s become hard to sleep on its explosive music scene. Out of the tight-knit music circuit, We Burn Bridges formed back in 2012 by a group of keen, young, like-minded friends in school.

Since their inception, the band has undergone a few member changes while still maintaining a presence in the local scene. The band has played alongside the likes of Northlane, Polaris, In Hearts Wake, Hellions, Dream On, Dreamer and Storm The Skyto name just a few. Celebrating their return, We Burn Bridges were recently announced to play Darwin’s TerrorLoud One alongside Alpha Wolf, Diamond Construct and Lune on May 7. Tickets on sale via Eventbrite.

The band were off to a solid start when their 2016 single ‘Coward‘ was nominated for Northern Territory’s Heavy Song Of The Year. Shortly after, We Burn Bridges debut EP ‘Head Prison‘ was released in 2019 and has garnered over 210,000 Spotify streams, high praise from Aussie media including Wall Of Sound when they said: “These guys might be the hottest thing to come out of Australia’s Top End for 2019“, GC Live looked toward the future in saying, “We’re all looking forward to see what’s to come in the future for these boys. It’s still early stages for them, but after a release like this, it can only go up from here” and Maniacs highlighted “You generally don’t often hear of many bands coming out of Darwin, but We Burn Bridges are a killer example of the city’s hidden gems.”

Through a few hardships and line-up changes, the boys are back with a vengeance and ready to carry into the new year with a fresh sound.

“Predator” is available now and streaming on all platforms. 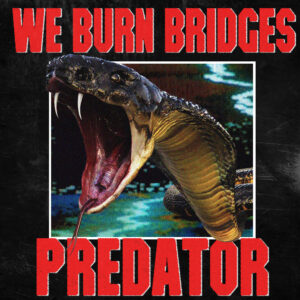