For Perth-via-Busselton trio Pretty Uglys, 2020 remained a fairly fruitful year even though the party/live music opportunities elsewhere around the country came to a screeching halt. Out on the West Coast, the band dedicated the year to the preparation of their forthcoming EP Party Friends, releasing two tracks in ‘Soak It Up’ and ‘Dreamland Delusion’ – both further establishing the band as one to watch.

And now, as 2021 kicks off with hope, excitement and much anticipation for a return to normal, the Pretty Uglys guys kick this new era off with the EP’s title track, releasing ‘Party Friends’ from their forthcoming EP set for release in 2021.

A track that demonstrates the band’s strong dynamic, a love for some classic surf rock influences and a lean further into confident new sounds and lyricism, ‘Party Friends’ is the quintessential Pretty Uglys vibe that that band is charging ahead into the New Year with.

“‘Party Friends’ is a track about the connection often made during those not-so-sober times with friends that leave you feeling warm and fuzzy inside. It’s also about feeling accepted by your mates, staying true to yourself and the importance of having friends around.” Pretty Uglys

Writing and recording the track as a collective out of Perth’s Sumo Studios, Pretty Uglys approached their latest single with this overarching theme of bonds and connection well in mind, as well as their eventual return to touring. With dates locked in for Western Australia throughout January, Pretty Uglys are gonna be out on stages and back with fans very soon.

“We couldn’t be any more stoked to be playing the run of shows in January. 2020 was a strange year for everyone and it feels amazing to have heaps of shows on the horizon again; even better to have so many of our mates’ bands joining us for the ride.” Pretty Uglys 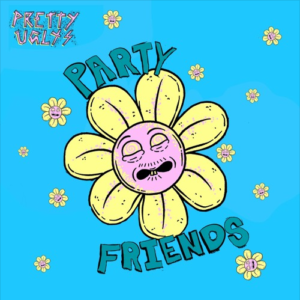 “Pretty Uglys have come forward to keep a future for infectious surf-rock in a way that feels authentic and properly surf-rock, comparable to long-time pioneers in the sound from FIDLAR to Skegsss, but with an edge that keeps it distinct to them.”
Pilerats

“They belt out an infectious brand of surfy garage with an energy that most bands take years to develop.”
Happy Magazine

‘Party Friends’ is OUT NOW!!