EP ‘PARTY FRIENDS’ OUT ON

“Emergency Room is one of the heavier tracks off the EP also being the opening track to kick things off with a punch. Written about a night out which ended with Jax landing in hospital needing stitches in his face, then heading to Perth the next day to play a sold out show with Ruby Fields, it was our biggest show to date at the time.”  Pretty Uglys

The band’s five-track sophomore EP features a mixed bag of punk and surf-rock songs that they’ve been playing in their live set for a while. It comes on the back of single ‘Party Friends’’, which was added to Triple j Unearthed and the DIY video on Rage. “Feels epic to get this release into the world collectively putting together these tracks in a way that helps solidify our own sound direction from over the past 12 months at least, with both happy and deeper/heavier tracks all in the mix’’
Pretty Uglys

Writing and recording the tracks as a collective out of Perth’s Sumo Studios, Pretty Uglys enlisted “good mate” Tristan Sturmer to mix the EP and George Georgiadis to master it. The band saying, “All songs we compiled together in our rehearsal room generally sparking from a simple guitar or bass part, which evolves into a sum what structured track with lyrics always coming last. We used the garageband app on iphone to demo a lot of it, then went to see to our good mate Tristan Sturmer at Sumo Studios Perth which is where we recorded all the final versions of the songs.”

The announcement of their sophomore EP coincides with the news that the band will be hitting the road in WA along with some of their mates in May. “We are starting in Fremantle with a show at Mojo’s Bar on the 1st of May. Next show is on the 13th playing a surf premiere party for RUSTY in Perth. The following night we head south for a show at The River in Margaret River near our home turf, then cruising back up the freeway for the last one on the 15 th of May at one of our favorite venues, Indi Bar in Scarborough. Stoked to have a big list of mates bands joining us over the 4 dates, yyeooowww’’. Pretty Uglys 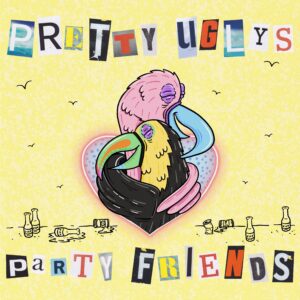 Party Friends: “hoping partying and general summer fun comes around just as quick as you promise! this has a real good energy that threatens to go turbo but keeps it just right throughout. 4 stars”
Declan Byrne Triple j

Party Friends: “They weren’t lying about their party pedigree. This is just such a good time from Pretty Uglys – what’s more it’s done and dusted in 3 minutes like the time it takes to wreck the garage during band practice.  4 stars”
Dave Ruby Howe, Triple j Unearthed

“Pretty Uglys have come forward to keep a future for infectious surf-rock in a way that feels authentic and properly surf-rock, comparable to long-time pioneers in the sound from FIDLAR to Skegsss, but with an edge that keeps it distinct to them.”
Pilerats

“They belt out an infectious brand of surfy garage with an energy that most bands take years to develop.”
Happy Magazine 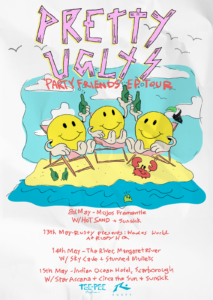