The song is erected on crunchy guitars and boasts the chorus: “You want to see a war? I’m here to settle score.”

It doesn’t mask its intentions and is an open invite to get into the pit and let everything loose.

“Over the last year, we have been working the hardest we ever have on music we couldn’t be more proud of,” the band offers. “High Horse is just the first taste.”

Wage War have built a diehard audience with Blueprints [2015] and Deadweight [2017] and through incessant touring. 2019’s Pressure exploded right out of the gate. Low piled on 24.9 million Spotify streams with Who I Am at 10.7 million Spotify streams and Me Against Myself at 8.4 million Spotify streams. Beyond bringing their total stream tally past ­a-quarter-of-a-billion, it landed on Loudwire’s “50 Best Metal Albums of 2019,” while Billboard praised the album’s levity. American Songwriter called attention to the evolution of the band’s songwriting and sound, while New Noise Magazine awarded it 4-out-of-5 stars. Elsewhere, Alternative Press raved, “Wage War are unapologetically changing the game on all fronts on Pressure.”

Wage War will hit the road through out August and September with Beartooth and Dragged Under. 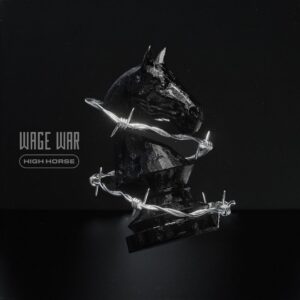