Verticoli, the three piece alternative-rock band from Tassie need no introduction. Known for delivering an absolutely killer live set, they are the perfect combination of invigorating, raucous and delightful.

‘True Love’ is the second single pulled from their forthcoming sophomore album, highlighting the ferocity with which the band has taken 2022. Finding inspiration from an unlikely source, the chance happening sparked the genesis of their latest single ‘True Love’.

“This song was written in a day after reading Dave Grohl’s autobiography and relating to a comment he made about writing music being like this drive within you that never ceases until you get the song out… then it starts all over again. I related to that, feeling like my relationship to music was an undying love that never really had to give me much back to keep me hooked.” Sam Hunn, Verticoli.

Verticoli started through a shared love of Alternative rock music, including the likes of Violent Soho, Nirvana and Smashing Pumpkins – and more locally – bands like You am I, Silverchair, and Regurgitator.

Their resume is as extensive as it is impressive and is enough to make anyone double take; an album, three EP’s, countless singles, hundreds of shows across Australia, festivals like Falls Festival and Party in the Paddock, and support slots for major Australian artists like Kingswood, Cog, British India, Delta Riggs and DZ Deathrays.

Recorded at The Wick Studios in Brunswick, ‘True Love’ is the culmination of an array of creative influences that bring the single to its highest potential. Engineered by Cameron Hull and produced by Jon Grace (Dear Seattle, Dune Rats, Kingswood, Bakers Eddy), the track was then mixed and mastered by Forrester Savell (Karnivool, Dead Letter Circus, Birds of Tokyo, Shihad)

Built from a demo, ‘True Love’ underwent an extensive creative process to bring it to fruition. Beginning as a hard-hitting punk song stuck in fifth gear, producer Jon Grace strengthened the lush instrumentation with trip-hop beats over the verses.

“We were baffled, and very hesitant! It wasn’t until we got into the studio that we were able to see what Jon saw,  and we’ve come out with a song with a lot more dynamics, depth, and tension. We’re glad we trusted the process!” Will Colvin, Verticoli.

Ultimately ‘True Love’ was built around the foundation of Verticoli’s passion for creating music that simply sounds great live. Accompanying this release is a 5 stop national tour that sees Verticoli journey through Victoria, New South Wales and Tasmania, bringing their unparalleled and invigorating live set to fans across the nation.

TRUE LOVE is out 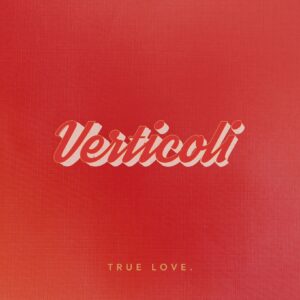 “I feel like I’m at Big Day Out listening to this!”

“Big, hard and hefty like a slab of cement. That’s Verticoli for ya.”

“They are just doing their own thing, and in pursuing a sound that is so uncool they are managing to be cool as fuck.”

“If you’re smarting for some proggy rock from the Apple Isle then Verticoli are coming for ya! Some good ol’ riffs in here too.”