His first taste of new music since the release of his inimitable STARS EP in December, Up Late has teamed up with Toronto-based artist Dxrmant for his new single ‘YOU PEAKED IN HIGH SCHOOL!’. The track premiered last night via triple j’s Home & Hosed.

Having both grown up in hardcore/heavy bands while now pursuing genre-bending solo careers, ‘YOU PEAKED IN HIGH SCHOOL!’ is the result of a lockdown collab begun over Instagram DMs. The track finds Up Late and his collaborator poking fun at people who are wrapped in high school-like trends and narrow-mindedness.

He explains that collaborating with Dxrmant found both artists bringing forth the tenacity and aggression of their pasts with their knack for genre-bending top of mind.

On the lyrics he adds: “It’s poking fun at people who continue to live life like they’re in high school. People who can’t get past their own reserved, narrow mind. People who latch onto trends or culture without actually participating or appreciating it.

“Both growing up in similar environments although living on two different continents, it felt like Dxrmant and I could really connect thematically and build on our own real-world experience living lives vastly different to the status-quo.”

About Up Late:
Up Late – AKA the moniker for Wollongong singer-songwriter, producer and visual artist Max Pasalic – marked the first solo project to join the UNFD roster after his signing in September last year.

After debuting the project in May 2020 with a knockout entry into triple j’s DIY Supergroup comp, Up Late  scored an honourable mention among 900+ other entrants, a nomination as one of the “10 most exciting discoveries of 2020” by triple j and nods from local music media including Pilerats, Blunt Magazine, Music Feeds, MILKY, Depth + more.

Backing it up with inimitable singles ‘FRIENDS’,  ‘u left me on read’ and ‘Alone’, Pasalic continued to flex on his flair for unusual genre blends. Many may remember the 24 year-old as the lead singer of heavy act After Touch, who released various outputs on UNFD in 2017/18, while he also has credits producing for various local and international rap and hip hop artists including the likes of BONES.

In December 2020, Up Late’s work culminated in the release of the ‘STARS’ EP, listen below. 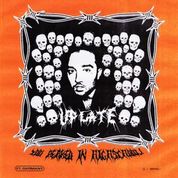