Metal innovators, Underoath, have announced they will be performing their highly anticipated new record Voyeurist in its entirety via their Digital Ghost cinematic concert on December 4 at 8pm AEDT time, in partnership with Moment House. The Digital Ghost event will continue to push further down the path the band blazed in the digital performance space last year with their groundbreaking Observatory event.

The Observatory was considered a major reference point in the evolution of livestreaming with its influence apparent in digital concerts from major artists thereafter. It was praised by everyone from Revolver and Loudwire to Forbes and CNBC for the unique way it treated fans to a raw and visceral experience with the hits they longed to see played live while being robbed of concerts during the pandemic. In addition to the enjoyment it brought fans during a difficult time, it reached a level of success where the band was able to replace the tour income they would have otherwise lost in 2020 and keep a team of over 20 live music professionals employed for a month while the industry was struggling to provide jobs.

This time around, Digital Ghost offers something entirely different – a chance to be part of a communal moment built around Underoath music that nobody has ever heard before. Voyeurist is arguably the most ambitious record of the band’s career, and it’s only fitting that the first time fans hear it will be during this equally ambitious event. Get your tickets now for Digital Ghost through Moment House and secure your spot in witnessing a pivotal moment in Underoath history.

Quote from Tim McTague of Underoath about Digital Ghost, “When we started conceptualizing the Voyeurist event, we knew that we wanted to do something different than a traditional live stream. We have done three of them and, coming back a year after Observatory, we knew we didn’t want to just repeat the cycle. One of the biggest goals was the idea of blending narrative with the visuals. Threading the needle on a live performance while adding in cinematic elements was a big part of Digital Ghost. The goal of Observatory was never to re-create a static live performance, and I think Digital Ghost is an extension of that thought. In the end, Digital Ghost is an attempt to push boundaries as a band and set a new bar for what virtual live experiences can be. With everything we do, there is a lot of risk and some lofty goals. It’s pretty special to conceptualize these projects and then watch them form in real time, especially when you have a finite amount of time and resources.”

Quote from Arjun Mehta, co-founder and CEO of Moment House about Digital Ghost, “We’re thrilled to partner with Underoath for their Digital Ghost cinematic concert ahead of the release of their new album,” said Moment House co-founder and CEO Arjun Mehta. “The band have masterfully embraced this powerful new medium and we can’t wait to help bring their remarkable creative vision to life with their fans around the world.”

Over the past few months, Underoath have continued to excite fans with a cryptic release plan that has included four singles from Voyeurist to date. Each track revealed has been accompanied by a deeper glance into the meaning behind the new record, which functions more as a multimedia art project than a standard album campaign. At the heart of this release is the immersive website, voyeurist.io, where visitors are able to peer in on other fans, as well as the band, begging the question of whether or not what they’re witnessing is happening in real time or is something pre-recorded. This serves as a microcosm of the overall effect that a digital existence has on us all and provides some insight into the concept of “digital ghosts” that is essential to the meaning behind the record.

Voyeurist marks the first time in Underoath’s storied career that they took the recording process completely into their own hands. The result is the most collaborative album of Underoath’s career and, anchored in a profound respect for each other, one that left no stone unturned creatively. The band refers to Voyeurist as “high-def violence” – technologically advanced, but undeniably visceral. Conceptually, Voyeurist has several interrelated meanings, each tying back to the concepts of how we curate ourselves through social media and how that facade masks a lot of what we actually experience in life. The album is a cohesive listening experience with enough layers to provide fans with a fresh take and new favourite track on every spin. 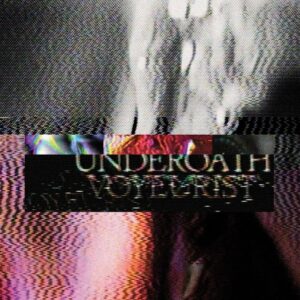