Twisted Records is pleased to announce the release of a sensational album of Shpongle remixes crafted by the newest addition to the label’s roster of artists, Cosmic Trigger.

Wunderkind producer Jamie Grashion has made impressive inroads into the psychedelic electronica scene, working for years as an engineer for leading artists at Youth’s studio before becoming Simon Posford’s assistant. His brilliance was so evident while he helped with preparations for Shpongle’s legendary 2019 Red Rocks concerts (he plays an integral role in the live shows) that Posford invited him to make his own remixes of the fabled band’s tracks. The result is this album of multifaceted soundscapes that draw the listener deep into a parallel dimension of Shpongleland.

With a fusion of skillful storytelling and impeccable engineering, Grashion has produced six tracks that are more like recompositions than remixes. Different facets of beloved jewels from Shpongle’s output are illuminated through each number’s organic structure, varied tonal palette, and pronounced percussive undercurrents. The atmospheres, rhythms, and styles are as diverse as those of the originals, each moment so creatively crafted that it feels like listening to something paradoxically new and familiar.

Cosmic Trigger’s brilliantly conceived sonic journey will be a welcome addition to the collections of Shpongle fans and all lovers of innovative electronic music.

“Shpongle Remixes” Due Out October 19th | Official Album Artwork below 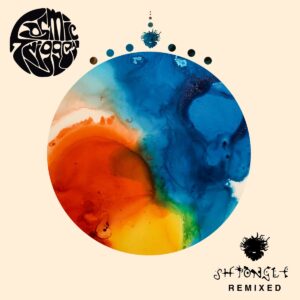