Australia’s maniacal rock-fusioneers Twelve Foot Ninja snuck back into the world’s eyes and ears last month with the stealthy drop of their single Long Way Home, the first taste of new music since their album OUTLIER in 2016. That single came with a 2D platformer videogame as a way to introduce the music video. Long Way Home peaked at #1 on SiriusXM’s Liquid Metal in the US and inspired comparisons to a Gotham City car chase.
Start The Fire can be streamed/purchased at: https://startthefire.lnk.to/Release.
Now the bandreleasestheir follow up single Start The Fire. Itwinds in with the lupine howl of a Tibetan kangling (a horn made out of a human femur). A chirruping pattern of digitised tablas and sliding panes of silvery synths then ratchet the tension before a demented scream and a snarling, bass-heavy, bowel-emptying riff drops in! 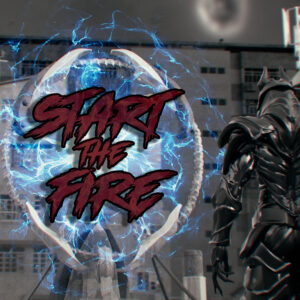 In the words of guitarist Stevic Mackay: “Start The Fire drew lyrical inspiration from Todd Phillips and Scott Silver’s portrayal of the Joker. When you start treating people according to broad prejudice, they may see little reason not to become what they’re supposedly guilty of already being. It can be a self-fulfilling prophecy.”
Twelve Foot Ninja also just announced on their socials that they have big news coming in the week following this single release. We’re watching!
Twelve Foot Ninja were the 2014 winners of Best New Talent at America’s Golden Gods Awards and 2016 ARIA nominees for Best Hard Rock Album (Australian Grammys). The last album was #1 on Australia’s Independent Records Album Chart, #6 on the all genre ARIA chart, #3 US Billboard Heatseeker and #15 US Billboard Alternative album.
Start The Fire is a promising run up to their much anticipated new album.
Stay Connected With Black Of Hearts