Sound tracking the youthful nights spent under the stars with a cinematic pop edge that feels like it belongs in a coming of age Netflix film, TRYHARD has been introducing himself to listeners through an empowering self-discovery lens. His debut single ‘Dopamine’ and follow-up track ‘Matches’ captured a raw energy that signalled the beginning of a deeply introspective journey.

His first release of 2021, ‘TOO REAL’ (out now), continues that exploration as he identifies his own toxicity surrounding an “almost relationship”.

“All my songs are written from personal experience. ‘TOO REAL’ was inspired by an almost relationship I was in. Writing it was really cathartic because it allowed me to reflect on all the things I endured to keep that person in my life. This was definitely one of the easiest songs I’ve written and probably took me no more than 15 minutes” he explains.

Touching on the different complexities of mental health, he honestly admits “I’m so overwhelmed right now” during the opening moments of the song which perfectly sets the tone for the rest of the 3 minute duration. Contrasting emotional self-reflection with a shiny pop production, he uses his personal PC-pop inspirations of Charli XCX and Kim Petras to unlock a playful side to a song where you might not necessarily expect it. Produced by Gustav Nilsson and Mastered by Paul Blakey, they help bring his vision to life and deliver his most polished pop moment yet.

“This song feels like a level-up for me as an artist. We’re getting into real pop territory now, and my music is starting to sound just how I dreamed it would growing up. I’m feeling more comfortable and more myself than I ever have before”.

TRYHARD is ironically the polar opposite of his name. With his music embodying a natural authenticity, there is a genuine ease that echoes through his songwriting and vocal delivery.

Creating pop music that whole heartedly tells his story with a glittery pop filter brushed over the top, you do feel like you’re getting to know him, and the vulnerable secrets we like to share in the dark, more candidly with every release.

The moniker TRYHARD is the bold musical project from 23-year-old Melbourne singer-songwriter James Comito who’s whole project revolves around the exploration of the confusing coming of age experience.

Projecting that through a very confident and colourful light, he taps the likes of Taylor Swift, Troye Sivan and Conan Gray as some of his biggest musical inspirations within finding his voice as an artist.

Stepping away from his behind the scenes work of songwriting and collaborating with fellow rising stars Muki, Oh Boy and Chris Watts, he’s stepped into the spotlight with his introductory singles that are a true testament to the collaborative work he’s been honing.

With ‘TOO REAL’ only being his third release, he promises to make 2021 a year where you get acquainted with him intimately as he unravels the different complexities to his artistry.

“With a club-ready, heartbeat pulse and the nostalgic yearning of John Hughes films, Melbourne bedroom-pop producer James Comito’s debut single under the moniker TRYHARD – ‘Dopamine’ is a rush of pure ecstasy” – Opinion Police 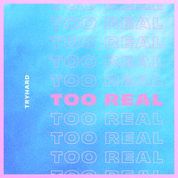 One thought on “TRYHARD returns with cinematic pop track ‘TOO REAL’”