‘DRIVING THROUGH THE CITY’

The powerhouse collaboration from two of Melbourne’s most promising emerging artists continues, as R&B Prodigy Triple C and Hip-Hop Wonder Mythic gear up for their second project of the year.

After releasing their soul-stirring love-centric track ‘Diamonds’ in April, the dynamic duo strikes back whilst the iron is still hot with their newest single ‘Driving Through The City’, set for release with a music video out today.

Like a well-oiled engine warming up to its full throttle, the track starts slowly and steadily with an electrifying guitar-driven tune. The emotive cadence smoothly ushers the blues into a pulsing fusion of hip hop and rap, which highlights the complementing styles of these two artists.

The sentiments of a homie is the heart of the single, as its bittersweet, nostalgic lyrics and sonic magic take us back to nights with friends we thought would be infinite. Written by both Triple C and Mythic—with production and mixing by SB90 and mastering by Nicholas Di Lorenzo of Panorama Mastering—’Driving Through The City’ has everything we want in a soundtrack for long drives with the people we love.

Released with an equally sweeping music video by Dillon Pearce Media and Joyce Northey, this masterpiece solidifies Triple C and Mythic’s place in the industry as formidable forces in Hip Hop and R&B. Following the nods from established Australian media outlets such as Amnplify, Australian Music Scene, Plenty Valley FM, and KISS FM, among others, they have come so far from their humble beginnings, indeed.

“Triple C has a saying he uses constantly throughout media appearances, live performances, social media, branding and his songs themselves: “Inspire the ones who don’t desire”. We wish for our music to inspire our fans and prove that anything is possible with a little inspiration and solid role models.”—Mythic

It is undeniable that much of themselves was put into their music. With their sense of style and direction, there is no doubt that these two will not only drive through cities, but thrive in cities and conquer them all. So make sure to keep up with their rides by following the links below! 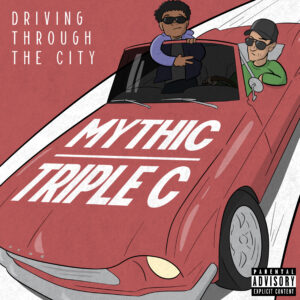