2020 may have been a garbage year for many, MANY reasons, but one area that flourished was the MEMES. Trancestate’s new single Lorna Jane was written during (and about) the ‘Karen’ meme craze of 2020. A song to tell the ‘Karens’ of the world to chill out & have a drink. So sit down, grab a drink and take a BIGGG sip over at https://distrokid.com/hyperfollow/trancestate/lorna-jane!.

The single dropped today and it comes with an irreverent film clip. From the band themselves… “The accompanying film clip was only natural. Just us, playing a house show to all our friends and carrying on like idiots. This is the Regional Australia we know and love that people don’t get to see very often. We got our good friend Hayley Goslett to play the real estate ‘karen’ that wants to evict us at the start but ends up partying with us – and we see just how far the mighty have fallen.”

‘Lorna Jane’ is a hard hitting, bass wobble driven belter written during and about the ‘Karen’ meme craze of 2020 – it is a heavily synthesized wall of sound blended seamlessly with low tuned guitars, filthy vocals reaching from guttural lows to extreme highs and a pounding rhythm section with an odd-time signature, with a progressive flair. Together with the accompanying house party film clip, filled with some of the most colourful characters Regional Australia has to offer, Trancestate have once again shown that you can be both disgustingly heavy and fun in equal measures!

Do you seek the raw energy of Death Metal vocals and the soaring synth leads of Darkwave? The cinematic soundscapes of progressive metal married perfectly with the aggression of Deathcore? How about the odd disco beat? Trancestate is all these things and more. A culmination of multiple styles and influences to create the ultimate aural explosion.

Australian Electronic Metal band Trancestate released their self-produced debut album ‘Planetary Awakening’ with the singles ‘Impact’ and ‘Pandemic’ and their accompanying film clips in 2018 to glowing reviews, followed short by a live debut opening a sold out show in Albury NSW in support of their fellow Aussie metalcore legends Windwaker. Known for their ridiculous stage antics and silly ‘dadbod’ social media presence they provide an interesting and appealing blend of heavy hitting metal and synth driven groove, all served up in a self deprecating and comedic bundle of fun.
Trancestate single ‘Lorna Jane’ out now. Official single artwork below 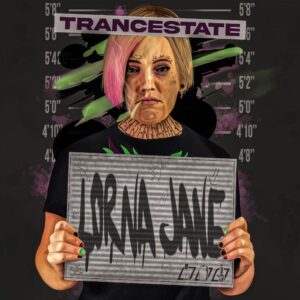 Trancestate’s new single ‘Lorna Jane’ is over at https://distrokid.com/hyperfollow/trancestate/lorna-jane.
Stay Connected With Black Of Hearts