Melbourne singer-songwriter and producer Tommy Harris has revealed his sun soaked alt-pop single “Florence”. Combining the realism of organic instrumentation with twists of electronic elements, Tommy is creating a world full of fun with this track, providing a hint of what’s to come from his forthcoming EP.

The track features heartfelt lyrics based on the experience of Tommy’s previous relationships, juxtaposed by the fresh, punchy pop sonic environment. Pulling inspiration from lived experiences as Tommy journeys into the complexities of adulthood, reflecting on the ups and downs of relationships, life changes and the emotions that accompany them.

“I love all the songs on my new EP, but I’d say Florence definitely means the most to me. It was the first song I wrote for the EP during a really tough transition in my life,” said Tommy. “I had just ended  a 4 year relationship with my girlfriend as she was moving overseas and this was a huge change for me. ‘Florence’ tells the story of all the emotions and frustration of being distanced from someone who means a lot to you.”

Growing up by the seaside town of Sandringham, Melbourne, Tommy spent many of his early years watching his dad play the guitar. By high school, Tommy had his knack for the acoustic device. Picking up every instrument he could find, music quickly became the only thing Tommy was interested in doing. After buying his first microphone and some amateur recording gear, he promptly jumped into the world of writing and producing his own music.

Now at the age of 23, Tommy is determined to build a life around music, deciding to move his life up to Sydney to be near the producers and songwriters he admires. With no looking back now, Tommy has been spending all of his time learning and improving his skills and focusing on his music with fewer distractions and the right people around him.

In the lead up to his debut EP, Tommy Harris has been uncovering his style within the alt-pop space, finding a pop fuelled, danceable place while remaining introspective and sharp.

“Florence” is available to stream on all platforms now. 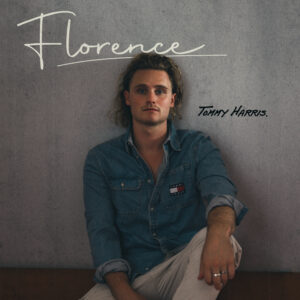